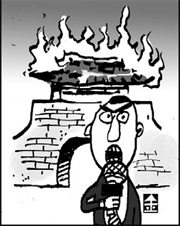 The 24-hour news channel CNN emerged as the world’s leading broadcaster in 1991, making an impact during the Gulf War.
CNN created the standard form of broadcast journalism ― live broadcasts and on-the-spot scenes, promoted by the “Breaking News” announcements.
Of course, some people were concerned that CNN was dealing with the war as if it were any other visualized event aired on TV. War was brought into people’s living rooms and made it look like the screens from popular video games.
CNN also stresses its ability to be first on the scene, such as when the first plane hit the northern building of the World Trade Center, securing images taken by a passerby.
When the second plane hit seven minutes later, most TV news broadcast the live footage.
Americans were shocked to witness such a huge catastrophe in real time, though people had seen similar scenes in blockbuster films.
Afterwards, movies tried to capture the psychological impact of 9/11. “War of the Worlds”(2005), directed by Steven Spielberg and based on the H.G Wells novel from the 1930s, focused on how aliens were a threat.
There’s little doubt that the scenes showing buildings collapsing and people fleeing drew on images from 9/11.
The monster movie “Cloverfield,” set in Manhattan, was shot like a CNN breaking news story using camcorders and mobile phone cameras.
“Vantage Point” featured the assassination of an American president on a live TV broadcast.
The president gets shot in the chest giving a talk at a summit, the podium blows up and a reporter gets killed while reporting the event live on camera.
Korea is still in shock after seeing live pictures of Sungnyemun, widely known as Namdaemun, burning to the ground.
We have had our fair share of tragedy ― the collapse of the Sampoong Department Store and Seongsu Bridge, plus the arson attack on the Daegu subway.
However, cameras didn’t catch the moment of the accident. The fire at Naksansa Temple in 2005 still sticks in our memory, because we saw it on TV.
People could do nothing but watch the pitiful footage as the ancient temple burned and the bronze bell melted in the flames.
Viewers who saw those painful images will never forget them. The sounds of people shrieking as they looked on has been burned into the hearts of the people of Korea.