Cross-country canal a symbol of Lee’s construction past

Cross-country canal a symbol of Lee’s construction past 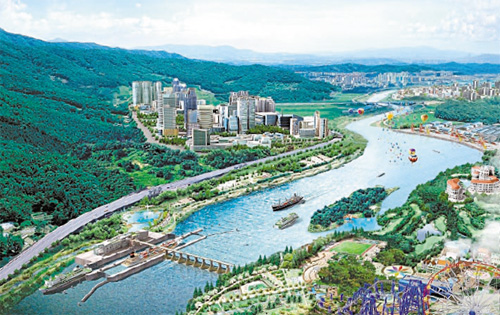 A computer rendering of the cross-country canal. The new government predicts that the canal, if completed, would attract thousands of tourists. Provided by the Grand National Party


The controversy over whether to build a cross-country canal, a campaign pledge made by President Lee Myung-bak, keeps getting bigger as the new administration and canal opponents clash more and more.
The presidential transition team claims the project would be profitable, enhance water quality and attract millions of tourists, but critics say it would not only be an environmental disaster but also a waste of money.
Lee promised to build three canals connecting Seoul and Busan in the southeast, Gwangju and Yeongam in the southwest and the mouth of the Geum River and Osong from the west to the middle of the country.
The longest, between Seoul and Busan, would be 540 kilometers (334.8 miles) long and have 12 freight terminals, 47 passenger terminals and 19 floodgates, according to Lee’s plan. The Seoul-Busan canal would be the most difficult and expensive to build, and is thus the most controversial.
Lee’s transition team says the canal would ease automobile traffic on the Seoul-Busan freeway. They said it would take 30 to 35 hours for a ship to travel from Seoul to Busan, including loading and unloading time, if it travels at between 13 and 30 kilometers per hour (8 and 18.6 miles per hour). The team said using the canal would be faster than traveling by sea.
However, opponents say Seoul-bound container shipments processed in Busan account for only 19 percent of Busan’s total shipments, and the volume continues to decline, an indication that not many container ships would actually use the canal.
They also challenged the transition team’s time estimate, predicting a ship traveling from Seoul to Busan via the canal would need 60 to 70 hours one way, rather than 35. This compares to five hours on the freeway and eight hours by train.
The president often cites Germany’s Main-Donau Canal as an example that supports his plan, but recently an MBC program reported that even the German canal’s future is in doubt.
The canal is frozen between October and April and sightseeing ships cannot operate. Ships cannot travel at high speed because an accident could damage the canal.
Passing through the floodgates also takes a long time.
In addition to a canal’s economic viability, the construction cost is also being debated. According to Kwak Seung-joon, a member of the team and incoming senior secretary for policy planning, the canal would cost up to 15 trillion won ($15.9 billion) including compensation for land and environmental measures, but critics said it could cost triple that amount.
Proponents say aggregates dredged from the bottom of the Nakdong River can be sold for an estimated 8.3 trillion won.
However, opponents maintain that the aggregates will be worth a maximum of 3.6 trillion won. They predict costs at 40 trillion to 50 trillion won, including the cost of rerouting water sources near the river’s upstream areas.
“Including the cost of maintenance, rebuilding bridges and rerouting of water sources, it would cost 40 trillion to 50 trillion won,” said Hong Jong-ho, an economics professor at Hanyang University. “The effects of the project and ways to raise capital are exaggerated with lies and errors.”
In response to the worries over cost and the use of tax money, the team suggested that the canal be built using private sector investment. It said construction companies could build it for 15 trillion won and recoup the expense with potential proceeds from operating the canal. 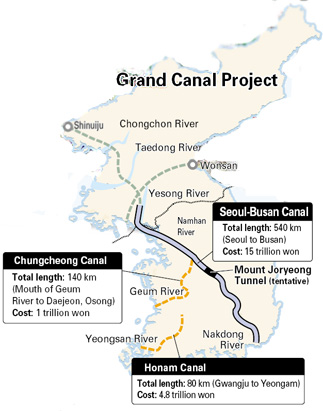 However, there is no guarantee that operating the canal would be profitable and generate enough revenue for builders to recoup their investment. If it is unprofitable, the government has to make up the shortfall with tax money.
For government projects funded with private investment, the government still compensates the companies for up to 75 percent of the construction costs. Local governments and builders are likely to inflate statistics for projects funded with private investments for the sake of development, experts said.
“Those placing orders tend to exaggerate data and use unrealistic forecasts,” said Kim Gang-su, a researcher at the Korea Development Institute.
Five construction companies, including Hyundai Engineering and Construction and Daewoo Engineering and Construction, want to participate in building the canal and intend to form a consortium.
“Even if the canal is not profitable, or only breaks even, we intend to participate in the construction,” said Seo Jong-uk, the chief executive officer of Daewoo.
“The government must assure the project’s future profitability for the long term,” said an official from a construction company planning to participate in building the canal.
The most controversial issue, however, is the effect canal construction would have on the environment. To connect the Han River in Seoul to the Nakdong River in Busan, floodgates would have to be built in the river and waterways would have to be built in mountainous areas.
What concerns people most is the potential negative environmental impact. To build the canal, the path of the river needs to be straightened and the bottom has to be dredged to keep its depth at a certain level.
The team said water supply sources and the canal could be separated by a wall and that drinking water could be obtained from the separate clean water sources.
It also said because a canal would increase water volume, canal construction could double the amount of water carried by the Han and Nakdong rivers.
Dredging contaminated earth from the bottom of the rivers would improve water quality, the team said.
Opponents said construction would contaminate the water sources and that the damage would be difficult to reverse once it is done.
“Not even a ferry boat is allowed to sail near Paldang Dam in the Han River, but the new government wants to set a containership afloat on the river’s upper reaches,” said Lee Kyoo-yong, the former environmental minister. “People should not forget that 30 million people rely on the river for water.”
Early this month, 80 professors at Seoul National University joined forces to express their concern over building the canal without giving enough thought to the consequences. “Building a canal would require an astronomical amount of investment and once it begins, there would be no turning back,” said Chung Yong-wook, a Korean history professor at SNU. 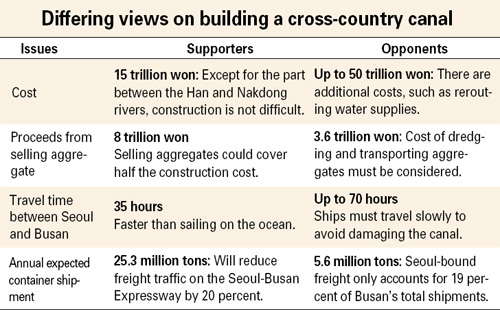 “Big canals could create green algae because of slow water flow and cause floods after heavy rainfalls,” said Kim Jung-wook, a Seoul National University professor teaching environmental engineering. “Rivers have to be maintained in order to prevent floods and protect nature.”
An SNU economics professor called the project anachronistic. “The argument that building a canal could improve the environment is absurd,” said Lee Joon-koo. “Politicians can retire when they finish their tenure, but people have to live with the legacy. We demand that they not begin something reckless without much consideration.”