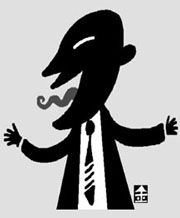 Adam and Eve’s elder son Cain killed his brother out of jealousy. That very same day, God asked him, “Where is your brother Abel?” Cain responded, “I do not know. Am I Abel’s keeper?” So, according to the Bible, we are the grandchildren of a murderer and a liar before God.
Humans are not the only species who lie. It has been confirmed that birds in the Amazon also lie.
The white-winged bull-headed shrike and ant bull-headed shrike post guards when the two types of bird flock together. When a predator such as a falcon appears, the guards cry out, raising the alarm.
But these wily fowls have been observed to sometimes raise false alarms. Then, while the other birds are busy hiding, the liars swoop down from the skies to eat all the insects. Of the 718 alarms observed, 106 of them were false, with no predator in sight. Moral issues aside, it seems that shrikes are among the brightest birds.
Some claim that human language evolved “to lie, and to tell lies from the truth.” Psychiatrist George Serban has said that lies are second nature to us. He backed this claim up with research that showed that in a 10-minute conversation between two people who know each other well, around two or three lies are uttered.
Lies for the public good, such as white lies, can be necessary. Even when Kim Young-sam planned to launch his policy of requiring bank clients to give their real names when setting up bank accounts, insisting that he had no such plans made enacting the policy much easier.
If a woman turns down a marriage proposal by saying, “It’s because you didn’t go to a good enough university,” it would only hurt the suitor unnecessarily.
It seems that the situation in Lee Myung-bak’s new government has been exacerbated because the cabinet candidates accused of real estate speculation are being too honest.
“My husband bought me an officetel to celebrate because I didn’t have breast cancer,” or “I purchased the valuable land because we love nature” are such explanations.
Criticisms are mounting: “Did he buy you a new car to celebrate because it wasn’t a cold?” Or, “If you love nature, shouldn’t you just buy a whole forest in the countryside?”
Why did they give such explanations when it was obvious that they would only work against them? The only possible reason is that they were telling the truth.
If that is the case, I would like to suggest the following. A civil servant should be honest, but if honesty unnecessarily hurts the people, the ability to lie is also necessary at times.