No military waiver for ballet men

No military waiver for ballet men 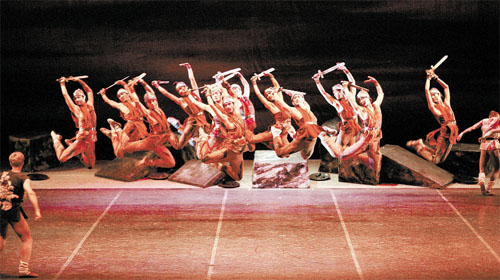 The story of Park Kwi-sub’s life reads like a Korean version of the English film “Billy Elliot.”
Like Billy, Park’s dreams of becoming a professional ballet dancer were almost scuppered by prejudice and conservative working-class values.
Growing up in Muan, a small countryside town in South Jeolla noted for fresh octopus and scenic lotus ponds, Park loved watching tapes of Cuban ballet superstar Carlos Acosta soaring across the stage.
But Park’s father didn’t approve of his son’s artistic inclinations at first, in much the same way as Billy’s dad, a coal miner from northern England.
If Park’s mother hadn’t intervened, Park admits he might never have gotten parental permission to audition for the Korean National University of Arts, one of the country’s leading schools for modern dance.
But even though he’s now one of 31 male dancers at the Korea National Ballet, Park is confronted with anguish that Billy was lucky never to face: 24 months of compulsory military service.
There’s just one problem: Park has to win first or second prize at a major international dance competition certified by the Ministry of Tourism and Culture.
Previously, the top Korean male dancers could get exempted from a stint in the forces if they won one of the three major domestic competitions.
But the laws changed in January this year, throwing the world of ballet into turmoil.
With little warning, the Office of Military Manpower and Administration announced that starting this year male Korean dancers and musicians will get exemptions only if they win a major international contest approved by the Culture and Tourism Ministry.
Korea places strict enforcement of military duty for able-bodied males over 18, and the Military
Office decided ballet dancers could no longer enjoy exemptions.
The new law is a huge blow to promising young male ballet stars, whose careers tend to be short in any case, and who could suffer lasting injuries in the military that ruin their dancing careers.
Many young stars targeted winning a domestic competition as a way out of the military. These competitions cost less to enter as well and are less physically more demanding than international contests.
Promising young talent like Park now faces a stark choice: win an international competition certified by the Culture and Tourism Ministry here, or find another career.
Park won bronze last year at the New York International Ballet Competition and a Top Duo award earlier at the Shanghai International Ballet Competition. But neither award is good enough to earn an exemption under the new law. Park needed to win gold or silver in New York, and the competition in Shanghai is not certified by the ministry.
“When I was young, every dance competition was an exciting challenge,” Park says. “Now I get more nervous than before onstage because of the greater pressure. I push myself harder because I am more desperate.”
Local ballet companies are complaining bitterly. They say no safety net was cast before the new law was implemented. Ideas to set up dance troupes in the Korean army so dancers can continue their specialized exercise regimes or plans to fund dancers to compete on international circuits have gone nowhere.
Some commentators working in the dance industry call the new law “pie in the sky,” saying winning at major European and North American international competitions is an unreasonable standard to set.
No Korean male ballet dancer has won first or second place on the international circuits, not even Kim Yong-gyeol, the first Korean dancer to join The Paris Opera Ballet, one of the most prestigious companies in the world that dates back to the 17th century. 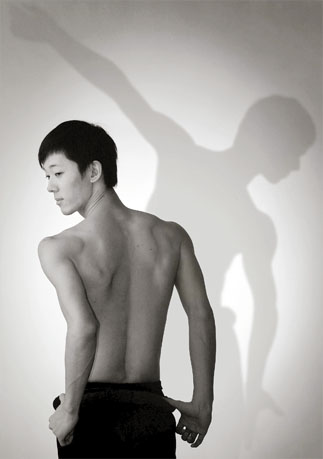 Park Kwi-seob won a bronze medal at the New York International Ballet competition, but he needed to get first or second place to earn an exemption from the compulsory 24-month military service. By Jeong Chi-ho

Under the new law, the industry could lose talented young dancers, insiders say. Ballet troupes in Korea are already importing dancers from countries like the Ukraine and China to accommodate a shortage of male ballet dancers here.
Universal Ballet Company, the nation’s second largest ballet troupe with 21 male dancers, has recruited a number of male soloists from Europe.
“It’s hard enough for male dancers to survive even if they are top-notch here,” says Kim Keung-soo, the founder of Male Dancers Forum and a ballet professor at Chung-Ang University.
“We already see a lot of them turning to musicals and contemporary dance because they can have longer careers. It’s self-evident that the industry will degenerate if young male dancers have to serve in the army at the peak of their career,” Kim adds.
Insiders say Korean ballet relies on military exemptions for its male dancers. The quality of the dancing suffers if male dancers have to put their careers on hold for two years.
Yet Korean ballet has made promising accomplishments over the past 20 years, despite what many Korean dancers describe as their physical disadvantages compared to their Western competitors.
Ballerinas Kang Su-jin and Park Se-eun have won titles at major international competitions like the Prix de Lausanne in Switzerland. The Korean National Ballet staged a Russian version of “Spartacus” in 2001 for the first time in Asia, featuring a charismatic army of local male dancers.
“We’ve come this far because we had reachable goals,” says Kim Keung-soo. “And we didn’t have to go to the army if we won at domestic dance contests.”
The rationale for the new law dates back to 2006 when local lawmakers introduced a bill seeking to stiffen guidelines for exempting artists and athletes from the military.
The bill was introduced after the government announced that the national team competing at the World Baseball Classic in the United States would be exempt from the military for reaching the tournament’s semifinals.
“The Office of Military Manpower has not taken any action to warn young dancers about the revised law since the bill was introduced,” says Kyung-hwan Moon, a member of the PR team at the Korea National Ballet.
“The authorities aren’t making the least effort to provide the basic infrastructure to foster art. They don’t have the mindset to differentiate between sport and art,” Moon says.
The situation confronting dancers like Park Geun-yeol is typical. A ballet major at Korean National University of Arts, Park started his two-year stint in the military in 2004.
He says he didn’t want to gamble on winning a competition, so he signed up for his military duty early, hoping he would recover from the rigors of military service quickly enough to resume his career.
Park thinks he made the right decision, but he’s still bitter. “It stresses me out when I see my friends and the freshmen in my program practicing,” he says.
“I say to myself, ‘Would I have been as good as they are if I hadn’t had to go to the army? Could I have won a competition?’ I don’t know, but when I see them hesitating [about when to do their military service], I tell them to go to the army now before it gets too late.”
Park thinks it will take another year before he recovers enough to dance on the stage again. He is hopeful, but others aren’t.
“Even if they continue dancing after they return from the army, you can’t expect them to become principals in major troupes,” says James Jeon, a guest choreographer at the Nevada Ballet Theater and the resident choreographer for Seoul Ballet Theatre, which has 10 males dancers on its books. “That’s why in most cases, young dancers prepare themselves to quit ballet forever when they go to the army.”
Military authorities are unlikely to budge, and say that their primary concern is public sentiment regarding exemptions from the military.
“All Korean men with some kind of talent suffers when they complete their military service, whether they are scholars, dancers or athletes,” says Kim Hae-gyu, an official at the local Military Manpower Administration. “Our job is to be fair to everyone.” 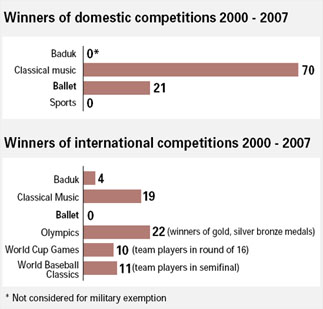 Kim says the Ministry of Defense reviewed a proposal to create a military dance troupe in Korea, along the same lines as the one that the Israeli government set up last year to reduce draft-dodging among dancers. But the idea was dropped.
“The Defense Ministry feels that the military has been cut down enough recently and it can’t afford to expand non-combat-related posts,” he says.
Park, the dancer at the Korea National Ballet, had a chilling moment of reality recently
He was performing “The Flames of Paris,” a classical ballet by the Russian Boris Asafiev, for a military unit on the outskirts of Seoul.
As the soldiers roared below the stage, Park says he was gripped with panic. He felt the cold reality of the new law, that if he doesn’t win an international competition before he graduates, he will have to serve 24 months in the army like the young men in the audience.
Not only that, he needs money.
“It cost 9 million won [$9,504] to prepare for the New York competition I went to last year,” he says.
“I promised my parents then that it would be the last time for them to pay for their son. It freaks me out, because I don’t know anything other than dancing.”