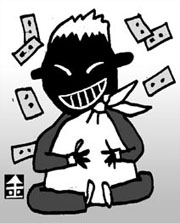 People who are fond of their friends and love to drink often quote a poem by Ouyang Xiu, a renowned writer of the Song Dynasty.
“If I drink with someone who acknowledges me, then even 1,000 drinks are too few. But if I talk to someone with whom I don’t share the same thoughts, then even half a phrase is too much.”
This excerpt is related to the word “speculation” or tugi in Korean, that we use a lot these days. “Tu” means “to unite together.” A “gi” is a frame. The term is easy to understand if we think of the word geun-gi used in Buddhism. It refers to the ability of a person to accept Buddha’s teachings.
The Korean word “tugi” originally meant a situation in which people nicely agreed with each other.
In Buddhism, it also means pursuing a goal to its end, according to Buddha’s teachings.
The word, which originally had good connotations, changed over time, eventually taking on the meaning, “making a profit at any opportunity.” It is used to describe a person who plunges into a good opportunity if one happens to arise -- a person who is always looking to make a profit.
In the market, investment and speculation are different. Investment is putting your money into something in order to increase your fortune in the long term. On the other hand, speculation is seeking excessive short-term profits. It means that you are willing to do illegal things for profit, and has a very negative connotation.
In modern China, speculation has a very negative meaning as well. Beside the word speculation or tugi, they add the word “cleverness.” It means one is an opportunist and makes profit through unjust means.
Criticism of the speculation by President Lee Myung-bak’s cabinet candidates has reached fever pitch.
If the nominees were willing to do anything to accumulate wealth, then they are certainly not appropriate for public office. If they resort to any means while in public service, it is the people who will suffer.
As such, the new government should make those with a history of speculation resign.
However, it is worrisome that critics of the new government are even considering simple acts of investment to be a problem.
If they are being critical of those who have done nothing wrong, then that is also a form of speculation.
It would be wise to avoid being seen as criticizing just for the sake of being critical of the new government.