[DVD Review]‘Pirates’ will just put you to sleep

[DVD Review]‘Pirates’ will just put you to sleep 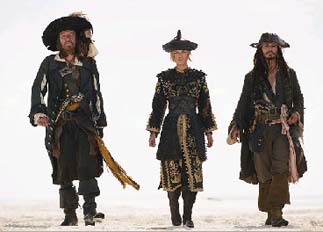 Pirates of the Caribbean: At World’s End

To be honest, I slept through the middle of this DVD after I tried to keep awake trying to understand what the third installation of “Pirates of the Caribbean” was all about.
Dozing off for half an hour was the good news; the rest is bad news. Jack Sparrow is what made the Pirates movies tick. O.K., throwing in one or two characters like Elizabeth Swann (Keira Knightley) and Will Turner (Orlando Bloom) is a given, just to spice things up. But beyond that, who cares what the others do?
Jack Sparrow is the heart and soul of this series and it should have stayed that way. Instead, we get a condensed version of Jack Sparrow as pirates like Barbossa have to unite against the evil Brits and Davy Jones and thus need to bring back Jack Sparrow from Davy Jones’ locker.
The movie jumps from plot point to plot point trying to explain everything at once with half a dozen characters thrown into the mix. There is hope here and there with some spectacular action scenes, thanks to the great computer graphics, but that’s not where the movie’s strength should come from. When Pirates first came out, it earned Depp a reputation as a box office heavyweight, in his very own way.
He gave life to Jack Sparrow but in the last sequel it wasn’t all about him. In short, “At World’s End” was one sequel too many. Two films should have been enough, leaving viewers yearning for more pirate sagas. But this is not a DVD to remember. So you won’t miss much by sleeping on the couch through this one, with its overly complex plot and not enough of Depp doing his thing.