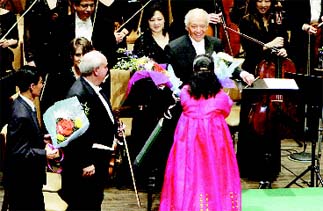 The much anticipated concert by the New York Philharmonic orchestra in Pyongyang has raised the hopes of many across the globe that a new day is dawning in United States-North Korea relations ― and that’s just what North Korean leader Kim Jong-il wants you to think.
It is no coincidence that the visit came in the midst of yet another stall in nuclear negotiations with North Korea. After a few consecutive months of progress in freezing and disabling North Korean nuclear sites, negotiations have hit an impasse. Many are once again questioning whether the current agreement will simply be added to the long list of failed attempts at diplomacy with the Kim regime.
Although the invitation was made to the New York Philharmonic in early December 2007, by the end of the month there were clear indications that the denuclearization process had hit a snag.
A statement issued by the U.S. State Department on Dec. 30 highlighted the concerns: “It is unfortunate that North Korea has not yet met its commitments by providing a complete and correct declaration of its nuclear programs and slowing down the process of disablement.”
The North Korean government was quick to say a declaration had already been submitted.
Many people therefore feel the Philharmonic’s visit was simply an attempt by Pyongyang to distract from the international focus on the nuclear situation, and lead the media into a frenzy of speculation on the future of U.S.-North Korea relations. The media has played right into the hands of Kim Jong-il, lauding it as a historic visit and comparing it to the “ping-pong diplomacy” with communist China in the 1970s and the Philadelphia Orchestra’s visit there in 1973.
What is important to recall in making these comparisons is the state of U.S. relations with China prior to the orchestra’s visit, or ping-pong exchanges. By 1969 the U.S. had begun relaxing restrictions on trade with China and seeking to increase bilateral contact. By the arrival of the orchestra in 1973, relations between China and the United States had already begun warming. While the cultural exchanges certainly helped break the ice over how U.S. and Chinese citizens viewed each other, it was President Nixon’s visit to the country in 1972 that was truly the catalyst for rapprochement.
Current U.S.-North Korea relations, however, cannot be characterized as good. The past 15 years alone have seen only occasional respite from what seem to be almost constant tension. The U.S. continues to support sanctions and trade restrictions against North Korea, and the leaders of each nation have even expressed their personal dislike for one another. President Bush has gone so far as to refuse to meet face-to-face with Kim Jong-il. And while there is currently an agreement in place to promote the denuclearization of the Korean Peninsula, there have yet to be any major breakthroughs.
Others have cited the North Korean announcement that the concert will be broadcast live by Korean Central Television as the largest potential benefit of the concert, with the event being beamed into homes across the country. However, estimates from around five years ago put the number of households in North Korea with televisions at only 6 percent of the 20 million-plus population, and the ongoing stagnation of the North Korean economy indicates that this number has not likely increased significantly in recent years.
Very likely, the true overall benefit of the concert will have been that it served to highlight socioeconomic disparities within North Korea. In a country known globally for its inability to feed its people, where economic stagnation and decline have been the status quo for the past few decades, an event of such evident luxury could not escape international notice.
The arrival banquet reportedly consisted of both Korean and Western style menus, with such delicacies as mutton and roast salmon, which even some of the American musicians found a bit extravagant. A violinist from the orchestra commented on the event, noting that it was “very sobering, because I know what’s beyond the hotel and the banquet.”
While the Philharmonic’s visit to North Korea may be lauded as an attempt by Americans ― not the U.S. government, but individual U.S. citizens ― to extend a hand to the people of an isolated nation, it is important to bear in mind the broader picture. The United States and North Korea have a long way to go before relations will begin improving, and it will take more than one flawless performance of “An American in Paris” before that happens.

*The writer is a research associate in the Global Studies Department, Samsung Economic Research Institute (www.seriworld.org).