All aboard the double-decker Seoul city bus tour

All aboard the double-decker Seoul city bus tour 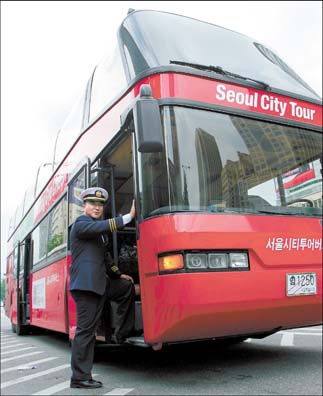 It is surely one of the laziest ways to tour the city of Seoul, but the thought of riding a double-decker here was pretty exciting.
The best seats are on the top deck at the front of the bus. You feel like you are flying as the bus careens around the jammed streets.
I took my seat a bit late so I had to settle for a second row berth. But I wasn’t complaining. From the top deck of a bus, you get a totally different view of the city.
No matter how long you have lived here, I can pretty much guarantee that you will see Seoul literally from a different angle.
The trip begins in Gwanghwamun in front of the Dongwha Duty-Free building across from the Dong-A Ilbo building.
It’s not hard to miss the embarkation point. Unlike London or Hong Kong, double deckers are a rare sight in Seoul. You’ll easily spot it.
I picked a Sunday for my jaunt. My traveling companions consisted of young families with kids and young couples giggling throughout the entire trip.
There weren’t any foreigners that I noticed, but the audio guide comes in three flavors: English, Japanese and Chinese.
The trip begins with a drive along the congested streets of Jongno. Now, I’ve spent a great deal of time hanging out in this old neighborhood, drinking in the bars hidden down the alleys of Pimatgol, which runs parallel to Jongno, but from the top of the bus, I felt like I was in a different city.
I picked out an old-time nightclub on the second floor of one of the buildings along the street. It probably saw its heyday in the 1960s.
Another building caught my eye. The first two storeys were occupied by a shoe company and the overall design was like a house from the Middle Ages in Europe.
The bus passed Boshingak, where the mayor of Seoul rings a bell at the stroke of midnight on New Year’s Eve. The guide, a woman in her 20s, stood in the aisle on the top deck and passionately told about the story of the bell, as if she were telling us about a sacred protective spirit that our ancestors worshiped.
The bus drove down to Jongno 5-ga, a street packed with pharmacies and jewelry stores, then turned right towards Samilgyo, a bridge that crosses over Cheonggye Stream.
The guide told us that if you look carefully, you can spot images of horses that used to clip-clop across the bridge.
One story the guide the neglected to mention concerned the unfortunate woman in her 50s who fell off Samilgyo Bridge the day Cheonggye Stream opened to the public in October 2005. She fell into the stream and died.
The bus then travels along part of Chungmuro. 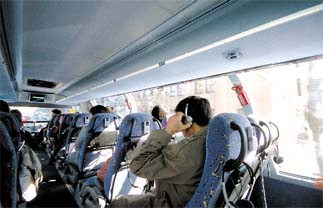 The audio guide comes in English, Chinese and Japanese, and a Korean guide gives a live running commentary during the day tour. By Lee Ho-jeong

“This is a center for pet shops and over the years it has become a major place for selling and buying motorcycles,” the guide explained.
At this point I began to take note of the other people on the bus. Sitting near me was a mother and child.
“Are you enjoying your ride Eun-bong?” the mother asked.
“Look at me because I want to take a souvenir picture,” the mother went on.
But the boy was more interested in fiddling with the audio guide.
A middle-aged man followed the tour with a huge map of Seoul spread on his lap. He was taking the tour seriously.
The bus passed in front of Sofitel Ambassador Hotel and wound around the trail that passes in front of Tower Hotel at the foot of Mount Namsan and headed toward Hannam Bridge.
From time to time, there are gaps in the audio guide and the tour guide had less to say as we made our way down to the Han River. The only notable item the guide mentioned was that Hannam Bridge was the third to be built in Korea, which in the grand scheme of life is not the most riveting of facts.
Long bus journeys are relaxing. You have no control over your destination, the driver or the scenery. So all you can do is look out the window. You can’t even read because you’ll probably get motion sickness.

Seongsu Bridge, rebuilt after the 1994 collapse, which killed 32 people.

So the bus was pretty quiet, except for one young guy who kept pointing out places he thought interesting to his girlfriend, who was clearly not from Seoul.
But then things got lively. If you’re on the top deck and the bus is hurtling along the bridge, don’t look down. It’s like you are floating over the water; you can’t see the road. it’s just a sheer drop into the Han River.
I’m not kidding, it’s scary. I’ve ridden some hair-raising roller coasters in my time and the bus trip over the Han River in a double-decker bus is almost as riveting.
Safely over the river and into Gangnam, I alighted at COEX in Samseong-dong, southern Seoul. somewhat relieved to be back on terra firma.
It was really hard to say if I enjoyed the bus tour or not. It gave me new insight into the city I call home. After all, how much do you know about the history of the neighborhood you live in?
But I enjoyed it enough that I signed up for the night tour. I figured at least I wouldn’t see the drop into the Han River so the trip wouldn’t be quite so scary.
The night tour covers fewer historical neighborhoods and buildings than the day tour, and you have to make sure the weather is compatible.
If it rains or snows, you can still see something out the window in daylight, but at night, even in areas of the city that are illuminated, there’s not much to see in foul weather when the rain clouds cover the night sky.
The night tour starts from the same place as the day tour. The only difference is that the night trip centers on the Han River and its colorfully lit bridges. After passing through Gwanghwamun, the bus makes a turn at Deoksu Palace and heads toward Mapo Bridge.
There’s also no guide at night. Well, no human guide. Instead, information is piped over the PA.
As we passed Yeouido, we heard that some Koreans refer to the island of Korea’s financial and political district as Korea’s Manhattan.

The bus traveled near the National Assembly building, which looks stunning in spring when the cherry trees are in bloom. I made a mental note: Come back then.
The bus passes Seogang Bridge to the northern banks of the Han River, passing over the uninhabited Beom Island.
According to pre-recorded tourist information, people used to live on Beom Island but they were forced to leave when sand from the island was excavated to help with the expansion of Yeouido.
The island is slowly recovering but it has been turned into an ecological park. People are not allowed to live here anymore, not for the foreseeable future.
We also learn about Seongsu Bridge, which killed 32 people in 1994 when it suddenly collapsed.
Jamsu Bridge is interesting. It’s built under Banpo Bridge and it is built so low that it floods when it rains heavily, closing off traffic.
The lights on the bridges have special meaning, too, according to the disembodied guide. The lights on Hannam Bridge, symbolize the ever-growing economic growth of Korea, apparently. 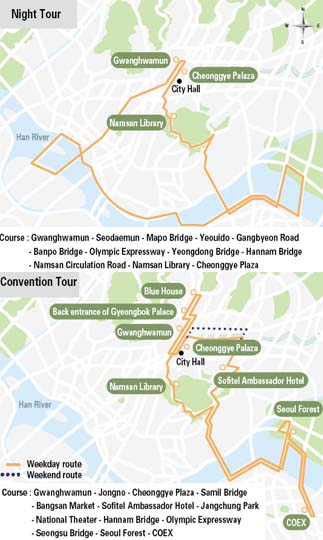 The bus then returns to Gwanghwamun via Namsan Road that runs along the foot of the mountain and into toward Namdaemun Market.
You can’t help looking at the site of Namdaemun Gate and remembering the fire earlier this month.
We passed by this once-great southern gate, each of the passengers silent as we passed the charred remains and headed to Cheonggye Palaza at the head of Cheonggye Stream.
For those who wish to have an in-depth trip in Seoul and rub elbows with the local residents, this bus trip isn’t really what you’d want.
Also when you get to take the trip during rush hour ― and believe me, Korea’s traffic congestion is notorious ― the ride may not be entirely satisfactory.
But you get to see Seoul from a unique perspective, and you won’t forget easily the the ride over the bridge from the top deck.

Times
The day tour starts at 9:30 a.m. and there is a bus available every hour until 5:30 p.m.
There is only one night tour and it starts at 8:00 p.m.
The night tour takes approximately just under an hour and a half.