Enjoy this funny reading material in the restroom

Enjoy this funny reading material in the restroom 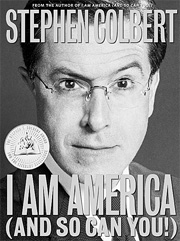 No matter where you open it, you’ll get a laugh.

Stephen Colbert ― the persona, not the man ― would be outraged by what he would call the unabashed liberal pandering to the right of this review. “Hillary Clinton and Barack Obama on the same page?” he’d say. “You might as well invite North Korea to nuke Seoul.”
While Colbert never makes the above statement in his recent book, “I Am America (And So Can You!)”, he does pen numerous similarly incendiary remarks. (See the introduction, where you’ll find “I’m scared of Koreans.”)
As the pundit host of the satirical public affairs program “The Colbert Report” (Note: As in Colbert, nix pronouncing the T in “Report”), Colbert (the man) assumes his Bill O’Reilly-esque persona, who rags on liberal politics and its alleged influence on the media. The persona, Colbert has said in interviews, is “a well-intentioned, poorly informed, high-status idiot.” Hence, the grammatically incorrect title of this book (which Colbert explains by writing: “Read this book. Be me.”
Colbert’s persona suffers from taking himself entirely too seriously, as evidenced by every aspect of this book, from the raised-eyebrow staredown he gives from the cover, to the American flag-like layout he uses to open each chapter to the red ribbon bookmark. But remember, it’s all part of the persona, and therefore meant to be hilarious. However, at times, such frivolous accoutrements as the two pages of stickers he provides can be more gimmicky than guffaw-worthy.
I Am America (And So Can You!) is also one of those books that doesn’t quite fit into a reader’s life. Unlike “America: The Book,” the 2004 best-seller by Jon Stewart of “The Daily Show,” Colbert’s treatise doesn’t have the obvious bulk of a coffee table book. But even as a slim volume, its hard cover doesn’t exactly lend itself to casual reading on the bus or subway. Plus, people will think you’re insane when you laugh out loud while reading in public. And it’s not like a reader would want to just curl up on the couch and read it all in one go; since just about every line includes a joke, this manifesto is best read in short bursts.
So where does I Am America (And So Can You!) belong?
I’d vote the bathroom. It’s sturdy enough to survive repeated reads; no matter where a reader opens it up, he’s guaranteed to get a laugh; heavy on the footnotes and margin notes, it’s also perfect for some in-depth, on-the-toilet perusal.
I mean no insult by this statement, either, just as Colbert’s persona sees no insult in writing in his “Old People” chapter: “Sorry, but retirement offends me. You don’t just stop fighting in the middle of a war because your legs hurt. So why do you get to stop working in the middle of your life because your prostate hurts? That’s desertion, which in my book gets you the early bird special at the firing squad buffet.” Classic.
So I say, buy I Am America (And So Can You!), stick it in your bathroom and hunker down on the toilet for some hearty chuckles. Just don’t blame me if you fall off the seat from laughter.