For political junkies, this is must read

For political junkies, this is must read 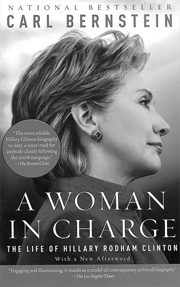 Just suppose Hillary never met Bill while they were studying law at Yale in the early 1970s, or that their relationship had petered out like so many campus romances.
Let’s imagine Hillary had pursued her own career in politics and had not stood back and played second fiddle to Bill’s brassy bass. Have far could she have stretched her political wings in Washington?
That’s a burning question at the heart of Carl Bernstein’s biography of Hillary, “A Woman in Charge.”
Bill and Hillary both worked on George McGovern’s 1972 bid for the presidency when they were still students at Yale. They campaigned in Texas for the Democrats. McGovern lost, but Hillary left an impression with her co-campaigners. “To the women working in McGovern’s Texas campaign, Hillary seemed to be on her way to an exceptional career in politics,” writes Bernstein.
They regarded her as a “real luminary, with a more impressive resume that Bill’s. “Given the likelihood of Richard Nixon overwhelming McGovern in the election [in 1972], they looked to her as someone who could help pick up the pieces of the Democratic Party and, in the next few years, run for office herself.”
Betsey Wright, who later worked as chief of staff when Bill was governor of Arkansas in the 1980s, is equally gushing. “There was an assumption about all the incredible things she could do in the world,” Bernstein tells us.
The dramatic irony reading Bernstein’s biography in February 2008 is that Hillary’s bid for the Democratic nomination for this year’s U.S. presidential elections has faltered. Her campaign could be snuffed out at next Tuesday’s primaries in Ohio.
Yet Bernstein’s book ― no hagiography but you get a pretty good idea who he would vote for ― insists Hillary has the potential.
Although her health reforms at the start of Bill’s first administration were never implemented, her presentation of her plans at committees of the House of Representatives and the Senate in September 1993 was exceptional, apparently.
The New York Times wrote, “Hillary Rodham Clinton dazzled five Congressional committees last week, advocating health care legislation in the most impressive testimony on as complete a program as anyone could remember,” while The Washington Post in response to her presentations called her a “superstar.”
Bernstein writes, “Hillary’s plan was an impressive demonstration of her intellect, dedication and ability to grasp the entirety of a huge policy debate.”
So where did it all go wrong?
Hillary hadn’t been in the White House five minutes when on her orders the corridor that for the past 25 years had given reporters access to the West Wing was closed off.
“It would have been difficult to dream up a scheme that would more rapidly raise journalistic suspicion or alienate reporters covering the White House,” writes Bernstein.
Rather than court the press and Washington movers and shakers, the Clintons, with a touch of arrogance, cultivated an “outsider” status, according to Bernstein.
Then there were the scandals concerning billing issues over the Castle Grande deal and Cattlegate when she turned $1,000 into $100,000 on cattle futures.
And then there was Bill and his amorous ways. One word: Monica.
Bernstein’s view is summed up in his purple prose when Hillary gets elected senator, “A new era could be glimpsed as the creation: Hillary was glowing, perfectly turned out, a woman in Washington at the center of the nation’s attention, a woman unique in history,” he trumpets. For political junkies, this is a must-read, a riveting account of one of America’s most intriguing women.

A Woman in Charge