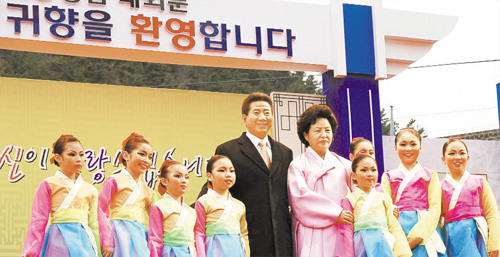 Two days before Korea’s former president, Roh Moo-hyun, arrived at Bongha Village, his childhood home in Gimhae, South Gyeongsang, about 10 workmen were busy setting up lights and sound equipment for the temporary stage where the welcoming ceremony for Roh was held last Monday.
“Roh is scheduled to arrive at the venue at 3:30 p.m. on Monday [Feb. 25] and after giving a greeting, he will walk to his private residence,” said one of the workers.
“The former president and first lady will light a signal fire at Bonghwa Mountain,” he added, while checking the routes to prevent any setbacks during the ceremony.
Tiny Bongha Village all of 48 households and just 121 residents ― was busy preparing for the welcoming ceremony for the former president, its hometown hero.
As planned, on Monday afternoon, a signal fire was started at the top of Bonghwa Mountain in Gimhae, informing Roh’s hometown of his return.
Some 12,000 people, including village residents and members of Nosamo, a club of his supporters, cheered and applauded while 2,008 yellow balloons rose to the blue sky. 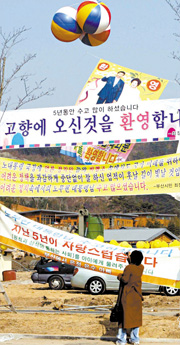 While Roh walked along the 100-meter red carpet, the Jeollabuk-do Institute for Korean Traditional Performing Arts played “Arirang,” a traditional Korean folk song.
On stage, Roh received flowers from two 8 year olds from Dechang Elementary School in South Chungcheong, a public school that Roh attended.
Kim Tae-ho, the South Gyeongsang governor, Kim Jong-gan, the Gimhae mayor and Choi Chul-kook from the United Democratic Party gave welcoming messages.
Said Kim Tae-ho: “A catalpa is valued only after 100 years when it is made into a geomungo [a traditional six-stringed musical instrument]. Though former president Roh has been much criticized, he will be properly appraised after his retirement. Now, we should support him as a village senior.”
Seon Jin-gyu, 74, the chairperson of the welcoming event committee, urged villagers to encourage Roh.
Korea’s eighth president, Kim Dae-jung, and United Nations secretary general Ban Ki-moon sent video messages to Roh.
Kwon Yang-sook, Roh’s wife, said, “Five years ago, I thought a first lady should neither step forward or step back ― I’m sorry I wasn’t much help to the former president when the public was misled about the truth.”
Roh said, “I will personally give tours to the groups that have already made reservations for a tour around Bongha Village.” He added, “I will participate in politics as a citizen.” 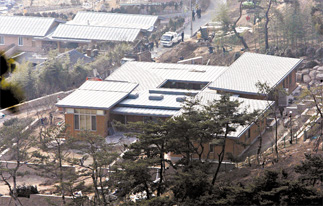 After his brief address, the former president and first lady went to their private residence, which was approved for their use by the City of Gimhae last month.
Construction of his new residence - 1,277 square meters in size ― is not yet finished. Stone walls are being put up and perimeter lights installed.
Roh’s new home was opened to the public last Friday for the first time.
Construction began on 3,991 square meters of land and a 993-square meter floor space. But in the end the floor space was increased 30 percent.
The construction has taken 13 months so far.
The new house has two wings, an outer wall of an earthy yellow shade and dozens of windows.
From the outside, it looks as if the house is made of three separate buildings but actually there is only one complex.
“From the living room, you get a view of a big rock on the peak of Bonghwa Mountain,” said a visitor who had a chance to look around the private residence. “The view is superb ― it feels like you are resting on a mountain.”
Some 20 wild cherry trees have been planted around the front gate. The old pine trees were temporarily planted during the construction period were later moved to surround the residence.
According to the Jinyoung Town Office, no one has officially moved into Bongha Village recently. The former presidential couple has yet to notify the office of their move.
Since leaving office the former president has reopened his personal homepage, “A World Where People Live” (www.knowhow.or.kr). The Web site will inform the public of Roh’s latest news.
Roh managed the homepage while he was an assemblyman in 1999 and closed it right before his presidential inauguration. 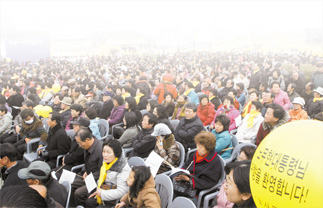 Cheon Ho-seon, a former Blue House spokesman, said, “The homepage will inform people of Roh’s past activities, proposals, photos and videos as well as his current activities.”
Roh’s close associates are planning to reside in Bongha Village, too, including Kim Kyung-soo, the president’s secretary for speeches and coordination; Moon Yong-wook, the president’s personal secretary and Park Eun-ha, an aide from the office of the first lady. Kim will be Roh’s spokesperson.
Other former officials expected to come and go at Bongha Village while helping Roh are Moon Jae-in, the president’s chief of staff, Lee Ho-chul, his senior secretary in charge of civil and personnel affairs, Yoon Tae-young, Roh’s former-spokesperson, Lee Byung-wan, the former Blue House chief of staff and Cheon.
But the final list of Roh’s close associates who will reside in Bongha Village has not yet been decided. The final list will be confirmed next month, when construction on the villa is completed.
The three-floor villa (including its underground floor) is at the entrance to the Village. It is 2,046 square meters in size and 14 households will move in.
When the construction of the former president’s new residence began in January 2007, there was controversy and criticism.
Among past Korean presidents, Roh’s new residence is the biggest. And Roh’s acquaintances have bought land nearby.
There was also criticism that the Korea Forest Service has allocated much of its budget to develop the mountains that surround Bongha Village.
For the past two years, Gimhae City received funding from the central government.
According to a Bongha Village research project report by the Ministry of Planning and Budget, which was submitted to the president’s transition team, 7.5 billion won ($7.92 million) was appropriated for Bongha Village tourism development; 3 billion won for Bongha Mountain well-being forest development; 6 billion won to create an eco-environment for Hwangpo Stream; 25 billion won to build a community center; 4 billion won to renovate a public stadium and regional funding of 28.4 billion won, which totals 49.5 billion won.
According to its future development plan, a village center with a pavilion and lotus pond will be built in the center of Bongha Village.
A 2,900-square meter parking lot for tourists will be environmentally designed with sections of grass.

Apricot, plum, zelkova and wild pear trees will be planted along the village roads. Iris and loosestrife will be planted around the village center and water plants will grow in the lotus pond.
The number of tourists increased as news spread that a large budget was being spent on developing Bongha Village.
Kim Min-jung, a culture tour guide, said the number of tourists doubled compared to a month ago.
“Around 2,000 to 3,000 tourists visit the village during weekends and holidays and 600 on weekdays,” Kim said. A village tourist who asked to remain anonymous, said, “I came to check if the village was decorated with gold.”
Three days after Roh’s homecoming, several dozen tour buses visited the village.
According to Bongha Village’s Tourist Information Center, some 2,300 tourists visited on Tuesday and 2,500 on Wednesday.
A 50-year-old tourist whose last name is Kim, complained, “This simple farming village has lost its original form.”