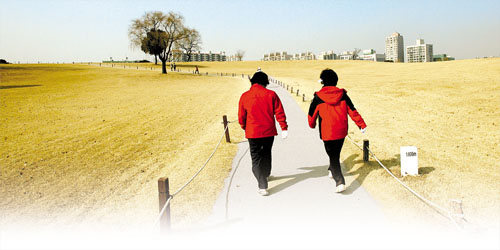 As I step out of exit 3 of Olympic Park Station, I take the long, broad pathway to the left that leads to Haneul Plaza in the east end of Olympic Park, the main venue of the 1988 Seoul Summer Olympics.
Despite the freezing weather, many young and old Seoulites are promenading around the open space, as if on a journey back to the 1988 Olympics.
In the center of the square stands an arch-shaped sculpture that resembles an athlete’s arms stretched open in celebration of a victory. The concrete work is titled “88 Seoul Olympic” and was contributed by an Italian sculptor named Mauro Staccioli in 1987. It is one of several artworks that decorate the 1.5 million square foot park.
I imagine the cheers of joy and cries of defeat that filled the air here two decades ago now. Despite the time that has elapsed and how much Korea has changed since, the Olympic spirit still remains here. It is an honor to still be able to walk the grounds that hosted 8,391 athletes from 159 different countries 20 years ago.
The park has six main stadiums: the Olympic Indoor Swimming Pool, which can hold 10,000 people; Gymnasium No.1 for gymnastics, No. 2 for fencing and No. 3 for weightlifting; the Velodrome; and the Olympic Tennis Court.
All told, 34 arenas and 72 sports galleries were used in Seoul during the Games. The opening and closing ceremonies were held at Olympic Stadium in Jamsil, southern Seoul.
When hosting the games, Korea won 33 medals, including 12 gold and 10 silver.
The plaza faces the 88 Lawn Field, where groups of people who would have been in their athletic prime for even earlier Olympics jog and work out on public sports equipment.
After the competitions, the international athletes and journalists would go back to their housing complex just across from the east gate in Bangi-dong. Constructed between 1986 and 1988, it is now the Olympic Seonsuchon Apartments, and athletic ability or journalistic credentials are no longer prerequisites for living there.

The complex began accepting guests two weeks before the opening ceremony of the Seoul Olympics on Sept. 17, 1988, and closed down three days after the closing ceremony on Oct. 8. Around 13,626 athletes and reporters stayed there, each paying $42 a day. There are now 5,540 households staying in the 122 apartment buildings there.
Park Nam-hee, 23, is a resident of the Olympic Apartments and she is fond of visiting the park that lays just in front of her place.
“The park is my second home,” she said. “It’s rare to find such a nature-friendly cultural and historical place right in front of where you live.”
Park enjoys taking evening walks, especially in spring when they blossom.
Looking around me now, I see many different types of tree stretching towards the Seoul sky ― zelkova, pine and willow. They now look sparse and bare, but in spring and summer, when their foliage fills out, they offer cool pools of shade to relax in.
I pass a booth that rents out bicycles and finally reach Sculpture Park. It is a pleasant 30-minute walk from Haneul Plaza.
The Seoul Olympic Organizing Committee hosted the “International Modern Art Festival” in 1988, which left 204 artworks by renowned sculptors from 66 different countries in the park.
Lee Jong-bin’s “The Invitee” is of a seated couple sharing a close moment. Other works randomly placed throughout the park include French sculptor Cesar Baldaccini’s “Thumb,” Australian Nigel Helyer’s “Din ding-dang-dong” and Kang Eun-yeup’s “What Falls is Flying.”
In 2006, the open gallery changed its name to SOMA Museum of Art, and is now an important part of the cultural infrastructure left by the Seoul Olympic Games. It seeks to continue in the cultural tradition established by the games.
The museum has hosted a wide range of exhibitions since it opened, including “Stillness and Movement,” a 28-artist sculpture display in 2004, and “From the Fall of the Berlin Wall to the DMZ,” an exhibit of video artist Paik Nam-jun’s works in 2005 themed after the peacemaking motions of the South and the North.
As I walk into the exhibition hall next to Coffee Bean, I see Eastern and Western-style paintings by painters Min Joung-ki and Emily Mae-Smith. The exhibition, titled, “Inter-viewing Paintings” features landscape pictures and runs until March 23. Tickets cost 3,000 won ($3.19) for adults and 2,000 won for children under 18. It’s closed on Mondays. 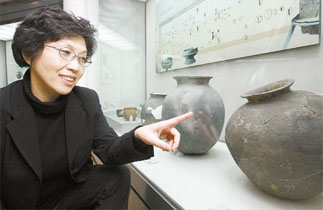 Heading straight out of the gallery leads you to the National Flags Plaza, Peace Plaza and World Peace Gate.
The 24-meter high World Peace Gate is where the Torch of Peace was installed. The massive concrete gate combines both traditional and modern architecture.
The painting on the monument’s ceiling was done by Baek Geum-nam, who usually does Western-style works. He used Eastern themes here, however, portraying four gods, a blue dragon, a red bird, a white tiger and a multicolored turtle snake.
The left and right pillars were made by sculptor Lee Seung-taek.
World Peace Gate stands in Peace Square. There used to be an ice-rink but it was removed two weeks ago due to the changing of the seasons.
Strolling around the park makes you hungry. In Peace Square, there are two restaurants, “Fresh House,” a health-food buffet and “The Ranch,” a grill restaurant.
The restaurant is populated by athletic-looking young people, most likely students from the Korean National University of Physical Education and Seoul Physical Education High School, east of Olympic Park. Perhaps they were there to check out the Seoul Olympic Museum, which stands next to the Peace Square.
As I step inside the museum building, a sculpture of Sohn Kee-chung, the first Olympian to win a gold medal for Korea, greets me.
On the first floor are displays of Olympic Games from ancient times all the way to the modern era. The second floor is designed to remind people of the glory of the Seoul Games, and includes a souvenir shop so they can express their admiration through the buying of trinkets.
There is also a hall that provides information on the history of Korean athletics and a model of the Olympic Stadiums and Olympic Park. An audiovisual hall presents the touching moments from the Seoul Games.
Coming out of the museum, I get onto a Hodori Tour Train which brings me near to Mongchon Fortress, a mountain fortress wall built during the Baekje Era (18 B.C.E. to 660 C.E. ). A one-way ticket from Peace Plaza to the Picnic Venue costs 1,000 won. The train is named after Hodori, who was the Seoul Olympics’ tiger mascot, designed by Kim Hyun. It was selected from among 117 candidates. 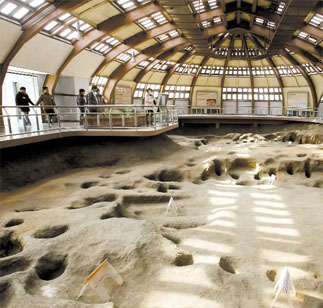 The Pit Hut Site, a dwelling site discovered in 1988 on the south wall of Mongchon Fortress’s east gate. Photos by Kim Hyeon-dong

The Picnic Venue is the launching pad for historical hikes to Mongchon Fortress. At various times throughout history a venue where Baekjae warriors protected their kingdom and athletes of the world came to prepare for competition, today it is a place for children to play, lovers to meet and ajumma hikers to make sure their equipment is in order.
“Most people think of Gongju or Buyeo in South Chungcheong when they think of the Baekje Kingdom,” said Kim Sun-jung, the curator of Mongchon Museum of History in Olympic Park.
“But 72.7 percent of the Baekje Era’s history happened in the Seoul area, right here,” she said. She pointed out that around 493 years worth of Baekje history took place in what is now the Gangdong and Songpa districts of southern Seoul.
And through six rounds of archeological digs between 1983 and 1989, a vast number of relics was found, including a dwelling site, storage pits and earthenware.
The fortress itself was built of clay on a 44.8-meter hill. The fortress was positioned to defend against enemies coming from the north.
Other fortresses in the area include Pungnap and Acha Mountain fortresses.
On the way down from the fortress walk towards the Olympic Park’s north gate, I stop by at the Mongchon Museum of History, which contains the traces of Seoul’s ancestors.
The Baekje-era hut site covers areas of Amsa-dong, Myeongil-dong and Yeoksam-dong. There are also models of ancient tombs and earthenware and whetstone relics.
As I enter the hut, I feel like as if I’ve been transported back to the prehistoric age.
“Many people lived around the southern part of the Han River,” Kim said. “The soil was fertile and there were many mountains and hills.” 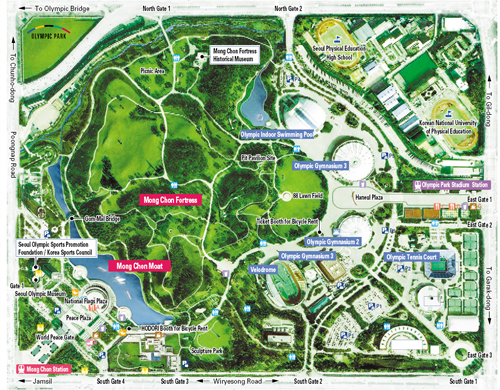 After a quick tour of the Pit Pavilion Site in Mongchon Fortress, I head back down to Haneul Square, where I began my walk three hours ago, feeling as if I have covered not only a significant stretch of ground, but also of Korea’s ancient and modern history.