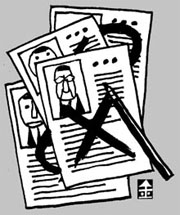 Former Prime Minister Shinzo Abe showed high spirits at the beginning of his administration. With national popularity from his forceful stance kidnapped people to North Korea and the distinction of being the youngest prime minister in history, he seemed to have good reason for high spirits. Only two months later his troubles began. Honma Masaaki, the chief of the Tax Commission, who had powerful influence on tax policies although he was not a member of the cabinet, was reported living with lady who was not his wife in an official residence for public servants. Masaaki, a former professor at Osaka University, moved into the residence and installed there a waitress he had been dating. An angry public kicked him out of office after he was found enjoying the official residence with a secret lover while urging that official residences be sold.
This turned out to be the start of a cascade of scandals involving Abe’s cabinet. The administrative reform minister resigned for alleged misuse of political funds and the minister of agriculture, forestry and fisheries committed suicide for bookkeeping fraud. His successor resigned for similar reasons in just two months. The minister of defense resigned after igniting a firestorm by saying, “The United States’ use of the atomic bomb couldn’t be helped.” The Abe government, reeling, lost in the House of Councilors election and folded with the resignation of the prime minister.
It was a stark contrast to the record of the former prime minister, Junichiro Koizumi, who served for the third longest period as prime minister in Japanese history and did not have a single member of his cabinet resign due to scandal despite large and small cabinet reshuffles.
The secret was in his thorough pre-evaluation of candidates for the cabinet. The vetting procedure that investigates in detail candidates’ relationships and money issues to screen out disqualified persons was known as a “physical check-up” in Japanese slang. If a candidate is left off a cabinet shortlist, they just think they’ve failed the “physical check-up.” The person in charge of this so-called physical check-up was Iijima Isao, a political secretary who served Koizumi for 35 years.
Three minister nominees from the Lee Myung-bak administration have resigned due to various scandals. For this reason, the first Cabinet meeting of the new administration had borrowed ministers from the former administration, creating an awkward start for Lee. If they had given more time to pass a physical check-up, these problems might not have occurred.