In the shadow of the president

In the shadow of the president 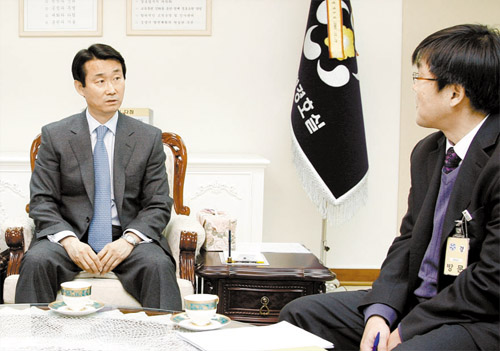 When former South Korean President Kim Dae-jung and North Korean leader Kim Jong-il met for the first time during the first inter-Korean summit in June 2000, security was obviously a concern.
Yet it transpired that the two leaders traveled from Pyongyang’s Sunan International Airport to Baekhwawon State Guest House alone in a car for 55 minutes.
This story prompted concerns in South Korea about the level of security afforded former President Kim.
How could he have been left without his security detail for nearly an hour?
“It was one of those cases where we knew what was going on because we had discussed all the plans beforehand,” said Yeom Sang-guk, the current head of the Presidential Security Service, in an exclusive interview with JoongAng Ilbo at the Blue House on Feb. 20.
But Yeom said full details were not disclosed at the time to avoid breaches of security.
“When visiting a foreign country, we sometimes use vehicles provided by the host country’s security service,” said Yeom, the first active head of the Presidential Security Service ever to talk to the media. “The decision was a little abrupt, but security was never a concern.”
The interview took place in a conference room attached to Yeom’s office. When you walk into the room, you can’t help but notice a barometer-like gadget on the wall. It indicates temperature, wind direction, wind velocity, precipitation and discomfort index.
Agents clearly want to be aware of all factors when putting together a security detail. So it’s no surprise that Yeom considers Blue House security to be the best of its kind, both honorable and loyal.
He said the operation was like playing in an orchestra because it needs a high degree of expertise and communication.
Despite his grand job title, Yeom speaks softly, without any hint of high-handedness. What was curious about the interview was that Yeom didn’t move. He stayed fixed in the same position for nearly an hour and a half. That must be part of the training ― intense control.
Yeom started working for the security service at the Blue House in 1982. He is a living witness to the Burma Incident when a group of North Koreans tried to blow up former President Chun Doo Hwan in 1983, and to the historic North-South meetings last year.
In March 2007, he was the first member of the security service to be promoted internally to head of department. Previous heads in the past were external appointments.
Yeom said when President Roh Moo-hyun met Kim Jong-il in North Korea at the second inter-Korean summit, North Korean security officials said they were shocked at how South Korea’s security service officials stood so close to President Roh and that they even talked with him.
He said North Korean security services couldn’t ever get so close to, or sociable with, Kim Jong-il. “Although there weren’t any conflicts between the two security groups, the quality of the equipment was different,” said Yeom. North Korean security vehicles were less mobile than those of South Korea, Yeom said, and he had to ask his men to adjust the speed of the vehicles to match the North Koreans.
Regarding President Lee Myung-bak’s hopes to spend weekends outside the Blue House and attend his church in Apgujeong after his inauguration, Yeom said, “Kim Young-sam went to church during his term and when Kim Dae-jung was in office his wife Lee Hee-ho, went to church every other week.”
The new administration is implementing reforms that affect security.
The president’s detail will be folded under the president’s secretariat. Yeom, who retired on Monday of last week, was the last to head the security service before the integration.
“The security service’s integration with the office of the presidential secretary is part of downsizing the government. Therefore it should be followed according to plan,” said Yeom. “However, since it is difficult for the security service and the president’s secretariat to work together ― although the security service is under the command of the office of the secretary ― there should be a personnel and budget management system that is run independently.”
Yeom added that although the name of the security service may change, the organizational culture and expertise will remain the same.
“I was promoted internally, so a good organizational culture is in place. It would have been nice if my successor had been from the security service, but the appointment is the president’s prerogative,” Yeom concluded.
Yeom’s last duty was securing Lee’s presidential inauguration.
Yeom met Kim In-jong, his successor, when he was chief of the capital’s defense command during the Kim Young-sam administration. Yeom was head of the security planning division and the two met on security projects. 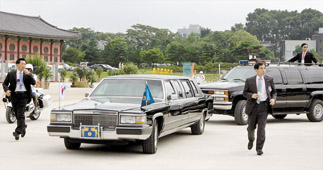 We imagine bodyguards to be heavily built tough guys who can incapacitate another man with a flick of the wrist. But Yeom is fairly ordinary.
He was born in Wonju, Gangwon, and graduated from Dongdaemun Commercial High School and majored in business at Kyung Hee University.
He said he was recruited by the Blue House security service after he was discharged from Korea’s special forces. He was trained in special Korean martial arts during his military service and hapkido when he joined the security service.
The outgoing security service head said mental swiftness is as important as a physical response to a crisis. He said security service personnel must understand safety and respond quickly to dangerous situations.
Yeom said he works out for an hour every day starting at 5:50 a.m and goes to the firing range every one or two weeks.
Park Chong-kyu, who headed the Blue House security service for 10 years from 1964, earned the nickname “Pistol Park” because he always carried a gun with him.
Yeom said he keeps a gun in his office at all times, which he loads when he leaves his office.
When asked about former President Roh Moo-hyun’s attempts to transform the security service in to a more public-friendly organization, Yeom said, “In the beginning some of the employees were concerned that such steps would lead to negligence and a complacent attitude to security. After all, a country’s secret service is an important way of measuring the development of a country. The less developed a country, the more powerful the secret service. Security is about control in underdeverloped countries.”
The next topic in the interview was the bombing in 1983 in Burma that targeted Chun Doo Hwan, who was president at the time. Seventeen died, including Deputy Prime Minister Suh Suk-joon, and 14 were injured.
Chun survived but it was the worst day in the history of South Korea’s secret service.
Yeom said he was in Sri Lanka as part of a prescreening team when the North Korean assassins detonated the bomb. “The site [in Burma] was a holy area so no safety checks were made. Each country has holy grounds. In such cases, the security responsibility is handed over to the host country. But security should be carried out jointly by both the host and visiting nations. When visiting a sensitive country, safety should be a priority, but in this case it wasn’t,” Yeom added.
When asked about the differences between the security service today and when he first joined, Yeom said, “It used to be tough to get a job back then in the Blue House security detail. Candidates often had the backing of heads of sports organizations or military special forces. Today, anyone can take the test.”
The first step is an extensive exam, followed by an extremely rigorous physical examination, background checks and tough interviews. ?
People say members of the Blue House security service come to work prepared to give their lives for the president. Based on this belief, how does Yeom feel in the morning and at night?
“I write down memos even when I am in bed and worry while working out if there is a complex event coming up like the inauguration. But I feel despondent when it is all over. It’s not good for your mental health,” Yeom said.
There were rumors in 2005 that during an APEC meeting in Busan the Russian presidential secret service brought along machine guns that were banned in Korea.
“They asked for the machine guns to be approved but the request was rejected. There are standards,” he said.
President Lee Myung-bak announced earlier that he plans to get out of the Blue House once a week. Before his inauguration, he visited his church in Apgujeong. What security risks will these visits raise?
“Visiting the same place in a convoy at the same time is not recommended,” said Yeom. “The security office and the ceremony team try to fine-tune the schedules, but ultimately security agents have to follow the president’s schedule.”
Yeom, who proudly said that his daughter was going to graduate from college this year, hopes to make up for lost time with his family now that his days as the president’s No. 1 bodyguard have drawn to a close.