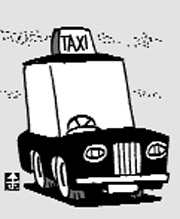 Black London taxis are a renowned tourist attraction in the U.K. capital, plying their trade on the city’s streets along with red double-decker buses.
If a London cab has a passenger, the driver is allowed to make U-turns anywhere, so long as it doesn’t hamper the flow of traffic.
London cab drivers must pass a series of difficult examinations. They have to have excellent driving ability and also pass a test of physical strength.
The most difficult barrier is the test on London’s geography. An examiner says a house number, and the examinee is expected to get there safely in the shortest time. If drivers wish to pass the examination, they need to wander side streets and ride a motorcycle around town for at least two or three years.
There is a saying that it is much more difficult to become a London cab driver within two years than it is to get a Ph.D. within four years from the University of Oxford.
London cabs have a special place in the hearts of Londoners. The fares are a bit steep, and go up depending the number of passengers. But nobody complains, and drivers can even expect a 10 percent tip at the end of the trip.
Riding in a London cab is an experience all of its own. Even a Rolls Royce can not freely enter the Houses of Parliament complex, while the cabs can.
Queen Elizabeth’s husband, Prince Philip, and son, Prince Charles, are regular customers.
Drivers proudly carry their London cab identification badges, like sheriffs.
The stock price of London Taxis International, the monopoly maker of the cabs, boasted an earnings rate of more than 290 percent in 2006.
However, London cabs are now in jeopardy. They may disappear soon due to global warming.
The 250 staff members of LTI hand-produce 3,000 cars per year. The trouble is the Italian-made diesel engine. It falls short of the environmental regulations in both Japan and the United States.
So these days, LTI is centering its attention on exporting to Nigeria and South Africa, which have looser environmental standards.
It is also fixing its eye on the Chinese market. LTI concluded a contract with a Chinese car company to produce 20,000 London taxis per annum. LTI has said that the black cabs will be very powerful over the coming decade in China. The company said it will not sit back and wait until its cabs become extinct in London. We can see here that global warming is changing the world in many unexpected ways.