[TV review]Neighbors in a pinch over who sits where

[TV review]Neighbors in a pinch over who sits where 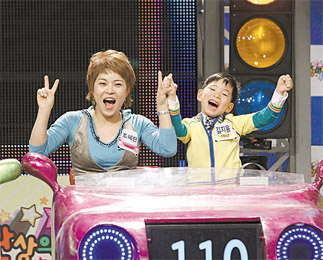 Who will be sitting next to me tomorrow at school?
This was a question that bugged me at school until I was in my teens.
My school was typically Korean in terms of the seating arrangement: Two students sat shoulder to shoulder behind one cramped wooden desk.
Naturally, it was essential to get a good neighbor.
But deciding on a deskmate at my first school was no easy task. My teacher at that time favored a strange policy that allowed male students to pick their favorite female students.
The teacher ― who was female, by the way ― asked the boys to line up at the back of the classroom. She then called the names of the boys in turn and they would choose the girl they wanted the most.
This was not one of the most pleasant memories of my youth. I am at least relieved to hear from my teacher friends that this tradition is dying out.
But I still feel sorry for the boy who sat next to me. I used to pinch him so hard he would burst into tears. It was my way of expressing my disgust that my dream choice had opted for another girl.
Yes, I know making that boy cry was childish and he suffered needlessly. Yes, I bullied him and yes, it was a kind of revenge. But a girl has feelings, too.
Anyhow, meeting the neighbor of your dreams still seems to be a matter of great interest to Korean TV addicts.
“Fantastic Neighbor at School,” which airs on MBC-TV at 9:30 a.m. on Sundays, invites teenagers to choose their favorite neighbors from a bunch of grown-up celebrities. They then team up for a quiz, whose prizes are too trivial to remember now ― let’s just say they were not impressive.
What struck me is how kids these days are so much more audacious and vocal about what and whom they want. It was very different in my day.
At the start of the show the children walk on stage and introduce themselves. A girl who said her name was “Smarty” bragged that she was pretty and intelligent, and she insisted her neighbor should be, too. Not suprisingly, she got the person she wanted: a female TV actor.
The teams played well, proving they had the collective brains to guess the right words, choose “yes” or “no” for a given sentence and do math in their heads.
One example from last Sunday was, “Will men drool at the sight of pretty women?” Many naive boys and girls said “yes,” with one girl using her 10-year-old brother as an example. In fact, the answer was a definite “yes,” as scientists have demonstrated that men really do salivate when they see attractive women.
What surprised me most was the sheer honesty of the children on the show. One of the boys last Sunday introduced himself by saying how much he loves his parents and adding that they fight every single night like boxers.
Another boy ditched the celebrity comedian Kim Guk-jin for “looking stupid and feeble” in real life.
Well, it’s hard to be a famous comedian.
The show scores a relatively high rating of over 15 percent on average, which I have to say is pretty decent for an early Sunday morning show.
At least the program creators have come up with a novel idea that tries to incorporate a theme for children that translates into a fun TV show.
By the way, I wonder what the boy whom I wanted as my “fantastic neighbor” at school is doing now. I hope life is treating him well, although I still harbor a grudge that he made such a terrible choice all those years ago.
It really is true that it just takes one TV show to dig out good ― or sometimes bad ― memories from the recesses of our brains.