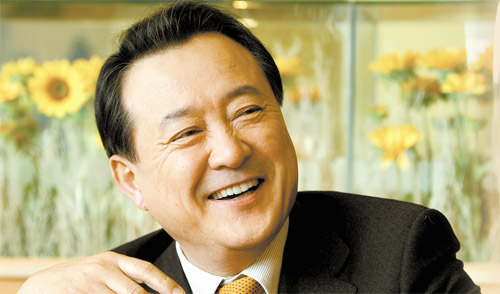 At age 62, actor No Ju-hyeon is heading for a new start ― he is appearing on SBS TV’s live news show “Morning Wide,” which airs every morning from 6 to 8:30 a.m.
No is in charge of a new feature called “Human Plus,” which explores current affairs from a human interest angle.
The veteran actor’s job is to comment on issues of the day and add his thoughts to the debates. His first show kicked off last Monday with a tale of a herbalist and his family who live in a hanok, a traditional Korean house, in the city of Daejeon, which is about two hours from Seoul by train.
Hosting the slot on Morning Wide marks a change of direction for the seasoned thespian. Since his acting debut in 1970, No has usually been cast as a courteous gentleman and from time to time as comic characters.
Well known for his starring roles in Korean sitcoms, No will continue to appear in SBS TV’s “The Woman” as Baek Dong-soo, a rich widower in love with a woman 30 years younger than himself, played by Yoo Seon.
Of course, this isn’t No’s first fictionalized love story. “I’ve had so many marriages and love relationships in TV dramas,” he said. His fictional lovers have been played by female actors such as Jung Yoon-hee, Lee Kyung-jin, Ko Doo-shim, Lee Hui-hyang and Kim Hye-soo.
No’s versatility is what the producers of Morning Wide found interesting when they were casting the role. They wanted a host who could be gentle, curious and judicious.
No confessed he has been hoping to be offered a project like Human Plus.
“To be perfectly honest, I’ve been waiting for a call to host this kind of current affairs program for quite some time,” he admitted. “It’s exhilarating to take on a new challenge in a field I’ve never tried before.”
On joining Morning Wide team, the first thing he did was intensively rehearse his role with the show’s producers.
The news story about the helicopter crash that took the lives of seven young soldiers was a recent topic on the show. He practiced hard to get the right tone and delivery. During the segment about the crash, No raised his voice in outrage and said, “Healthy, young soldiers died because of the wornout condition of the helicopter.”
The producers were not sure how to proceed with the program. Some wanted No to tone down his voice and be less confrontational; others wanted his delivery unchanged.
No said his response to the tragic accident in Gyeonggi was only natural: He has two sons of his own. “Other parents definitely felt the same as me,” he said.
“I want to M.C. the program as truthfully and sincerely as possible. All I want to do is deliver my own thoughts and opinions,” he continued.
When No is on air, he likes to be different and keep the script fresh. Five years ago when he was hosting a live radio program called “Hello, This is No Ju-hyeon and Kim Yeon-joo,” he rarely stuck to the script. He usually swapped the scriptwriters’ opening lines with words of his own.
On one occasion, No said on air that his radio team should set up a live outdoor broadcast from Mount Kumgang to mark the occasion of a new road opening there.
“But the people [in charge of Mount Kumgang] will ask for too much money,” he said on air, words that left the program’s producers a whiter shade of pale.
“If I made that comment on television, I would have been fired within a month,” he said.
But all that No craves now is to take on jobs that allow him to spread his wings and try something different.
“I’m not a good singer, but I’d love to do a musical,” he said.