How long must a refugee wait?

How long must a refugee wait? 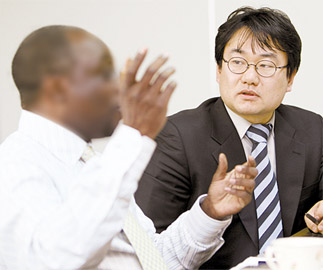 Muwana Umboka (not his real name) from the Democratic Republic of the Congo discusses his application for political asylum with Kim Jong-cheol, a human rights lawyer working for refugees in Korea. Umboka’s image has been blurred to protect his identity. [JoongAng Sunday]

North Koreans are not the only asylum seekers heading to South Korea to escape persecution.
While the number of North Korean defectors has surpassed the 12,000 mark, refugees like Muwana Umboka are hoping to be granted sanctuary here.
But getting refugee status in South Korea is a painstakingly slow process for men like Umboka, 41, originally from the Democratic Republic of the Congo.
“When I escaped from my country, I selected China without any definite plan, but I was afraid I might get repatriated since these two countries have close ties,” said Umboka, who for security reasons agreed to speak only under an assumed name. “That’s why I came to Korea.”
A civic group helped find the Congolese a job at a factory in Gyeonggi when he arrived in Korea in September 2002. Umboka has a master’s degree from home, and this was the first time he had done physical labor. He had to lift onto trucks sacks of livestock feed weighing up to 50 kilograms (110.21 pounds).
Umboka claims he was imprisoned back home after leaking classified information to the opposition party. He was a secret service agent at the time.
He filed for refugee status in November 2002 and underwent about 20 interviews with South Korean officials. A French pastor helped him during the initial interviews ― French is an official language in the two Congos ― but later he spoke English with government officials, although he was not that proficient in the language at the time.
He remembers that he was repeatedly warned by officials not to “lie.” Explaining in English the complex political situation in the Congos as well as his own plight was tough.
Kim Jong-cheol, a lawyer who represents Umboka, says his client was afraid he would get deported. 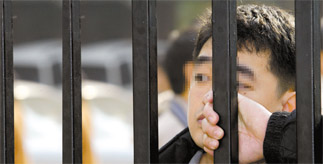 “I asked the officials whether it was possible to sit with him during the interview sessions, but I was refused,” said Kim, who argues that people seeking refugee status here need at the very least to be provided with an interpreter and a lawyer.
Those waiting for a Justice Ministry decision on their status have to renew their permit to stay here every 90 days.
According to the United Nations High Commission for Refugees, 2,421 Congo nationals applied for refugee status around the world in the first half of last year.
The Justice Ministry decided in June 2005 to deny Umboka’s application for refugee status because officials thought that his story sounded inconsistent. His appeal was denied last May, but he appealed again and last month the Justice Ministry granted him refugee status.
So it has taken several years to reach the decision, which civic groups argue is far too long for a single case. It means that other applicants are left in limbo and government officials, already struggling with a manpower shortage, can’t devote the necessary time.
“We only have six officers at the Seoul branch of the Korea Immigration Service, where the bulk of the refugee applications are filed. We are trying to get more funding and people to work on the cases, but there is a limit to what we can do,” said the justice ministry official.
Korea doesn’t have a great deal of experience dealing with applications for refugee status, having signed the United Nations Refugee Convention only in 1992. The government opened an office to deal with refugee issues in 1994, but it was not until 2001 that an African, who had waited two years, became the country’s first refugee.
The majority of applicants are usually from Burma, China and Africa. According to the Justice Ministry, as of the end of last year, 65 people have been granted refugee status since 2001. The cases of a further 1,804 people are pending.
A justice ministry official declining to be named argued that Korea approves a relatively fair number of cases. “Out of 454 people processed, we accepted 14 to 15 percent,” said the official.
Civic groups have a different view. “The government is too strict in demanding proof that these people will get persecuted if they go home,” said Lee Ho-taek, an official at The Refuge, a Christian civic group.
“I went to the Congo myself to investigate his [Umboka’s] claims. He also submitted a newspaper article on himself as proof, but the [Korean] government didn’t believe him. I think even if there is only a 10 percent chance of being persecuted, refugee status has to be granted,” Lee said. 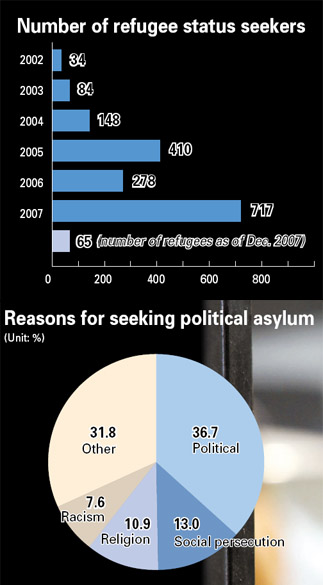 France is a favored destination for asylum seekers: 39,600 cases were pending there in 2006. Japan, in contrast, had 1,844 refugees with 1,217 cases pending in the same year.
The rights commission’s latest report on refugees, which was released in January, said refugee numbers declined steadily on a global basis from 2002 to 2005.
However, as of the end of 2006, the number stood at 9.9 million, the highest in four years.
The inflated figure is partly due to an estimated 1.2 million Iraqis recently added to the list, who have been displaced by the ongoing war in their country, and methodological changes for collecting data.
Worldwide, the highest number of new individual asylum claims by nationality was filed by Somalis (45,800), Iraqis (34,300), Zimbabweans (22,200), Eritreans (21,700), Chinese (19,400) and Rwandans (19,200), according to the report.
Without doubt, Seoul’s major concern are North Korean defectors, which is why better systems are in place to help them.
There’s a center that educates North Koreans about living in the South and job fairs that help with employment issues. Settlement fees, job training and free college education are also available.
While there are fewer asylum seekers here from other nations than from North Korea, people are working to address the problems. It is accepted by many concerned groups that the refugee situation could have a significant social impact here in the future.
An official at the Justice Ministry said the ministry wants to establish a center to streamline all operations pertaining to refugee issues, but budgeting problems are holding back plans.
Refugees can stay for three years if their application is granted, and then they have to reapply, he added.
“One of the main reasons that South Korea is seeing an increase in the number of asylum seekers is the refugee policy here is changing for the better,” said the official.