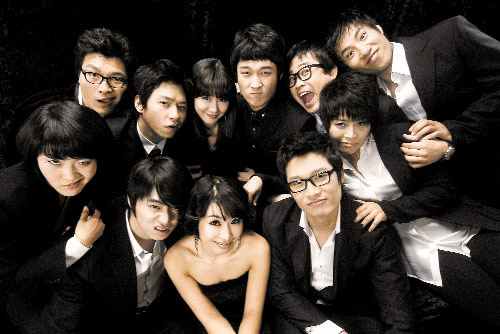 The cast of “Evil Dead: The Musical.” Provided by Showfac

Sam Raimi’s gruesome “Evil Dead” (1981) is an undisputed classic among zombie movies.
The film, and its sequels, contained great one-liners and graphic violence that drew a cult following.
So “Evil Dead: The Musical”?
The perky stage version of the original film looks set to spook audiences later this month.
It runs from March 18 through June 15 at Chungmu Art Hall’s Small Theater Black.
Ashley J. Williams, originally played by Bruce Campbell, and four college friends including Ash’s nerdy sister, Linda, spend a weekend at a cabin in the woods.
Instead of songs around the campfire and brisk hiking through the glades, they encounter evil incarnate when they stumble upon a dusty old book and a mysterious tape.
When they play the tape, they unleash a destructive force that turns the campers into the undead. The only way to kill the zombies is to dismember them using an electric chainsaw.
The musical promises to be heavy on humor and generally lighter on the gore.
Listen out for sharp lyrics like “If evil’s cool, consider me Miles Davis” in the track “Look Who’s Evil Now,” and “Don’t you want to join the crew/ You’ll be dead and evil too/ The coolest thing to do/ Is to join us” in “Join Us.”
The zombies in the musical are cuter than Raimi’s monstrosities, and they bang out a decent tune rather than mumble incoherently while biting off peoples’ heads.
No doubt the original zombies will be turning in their graves.
But be warned: The front row is the splatter zone. Make sure you pick up one of the raincoats provided, or you’ll go home zombified.