Maroon 5 get cast away for one night on Korean shores

Maroon 5 get cast away for one night on Korean shores 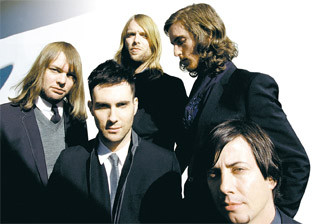 They may have started out as an indie band in California, but nowadays Maroon 5 could visit a club in just about any city in the world and hear their songs getting played.
But Seoulites should forget about listening to a recorded version of Maroon 5’s songs tomorrow night; the quintet will play live at Olympic Park on their world tour.
The concert marks Maroon 5’s first concert in Korea. While the band didn’t consider Korea a prime destination in the past, the increasing recent visits of top musical acts ― Beyonce, Linkin Park and the Black Eyed Peas, to name a few ― have convinced the funky fivesome that a date in Korea is worth arranging, according to a press release.
While Maroon 5’s latest album, the breakup-focused “It Won’t Be Soon Before Long,” debuted in May 2007 to critical acclaim and record-breaking sales, the band didn’t always have it easy.
Originally known as Kara’s Flowers, Maroon 5 released its first album, “Songs About Jane,” in June 2002. The band waited nearly two years before the record reached the top 20 of the Billboard 200.
The band’s rocking first single “Harder to Breathe” gradually picked up airplay, while ensuing singles “This Love” and “She Will Be Loved” revealed the band’s musical versatility.
Maroon 5 also went through a personnel change when percussionist and backup vocalist Mark Dusick bid adieu, but the band found a replacement in Matt Flynn.
The men of Maroon 5, Flynn, James Valentine, Jesse Carmichael, Mickey Madden and rumored lothario frontman Adam Levine, will perform songs from both albums at this show.
Let’s hope that when Levine sings the single “Won’t Go Home Without You,” the women in the audience will resist.