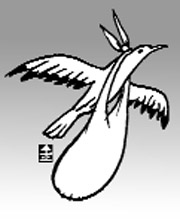 “They go when they’re warm and return when they’re cold. They always go find food in groups, and come back in droves.” This is how O Yeong-su’s short story, “Migratory Birds” begins. Though the story begins with a rather negative remark about the group-oriented movements of migratory birds, the story itself is different.
It’s about a shoeshine boy called Gu-chill and a middle-aged man named Min-u in the aftermath of the Korean War. Min-u returns to Seoul after helping the boy, who was separated from his parents and was suffering in turmoil in Busan. They meet by chance in the street and a friendship blossoms between the two. Gu-chill behaves as though Min-u were his father. Then, the boy is caught trying to steal shoes from a restaurant to replace Min-u’s wornout pair. The author reminisces about migratory birds as he writes about how the boy is beaten up by the owner of the stolen shoes and then disappears with a moving U.S. military unit. O reflects on the similarities between the boy, who is struggling to make ends meet, and migratory birds, who travel great distances in search of food.
Both struggle to make ends meet in the midst of turmoil. The fact that a friendship can form in the midst of such a harsh reality is the most inspirational aspect of O’s story.
The movement of migratory birds draws one’s curiosity. Biologically speaking, their movements are not that different from the behavior of other animals ― they’re focused on finding food and reproducing.
For example, in the tropics, where food is abundant, the competition for survival among animals is fierce. On the other hand, in the temperate zone, there are few natural enemies and the number of insects increases in the summer. However, in the winter, it is bitterly cold. This is why migratory birds risk all kinds of danger to fly thousands of kilometers to warmer places.
The movement of people through political parties is reminiscent of migratory birds. The chairman of the Grand National Party ethics committee said straight out, “The party has nominated migratory birds.” He was criticizing the fact that a cabinet minister in Kim Dae-jung’s administration and National Assemblymen from Roh Moo-hyun’s former party have now been nominated by the Grand National Party.
Politicians who behave like moths, drawn mindlessly to power, should not be accepted by the public. Not only should we exclude those with a history of corruption, but also those who behave like migratory birds. We feel a bit sorry for migratory birds that risk danger in order to survive, because there are so many who don’t make it in the end.