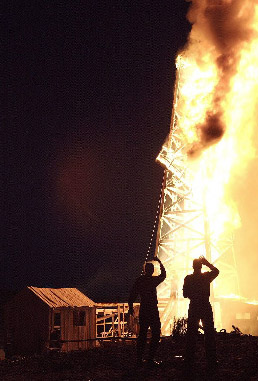 An oil gusher catches fire on driller Daniel Plainview’s well in “There Will Be Blood.” Provided by Miramax

Daniel Plainview, Daniel Day-Lewis’ character in “There Will Be Blood,” is the only person who could strike terror in your heart by saying, “I drink your milkshake.”
But to be fair, when he does so in this film, he’s screaming in a drunken, abusive rage.
This is just a day in the life of Plainview, a dastardly oil magnate who’s willing to do anything ― kidnap a baby, fire a pistol or bludgeon someone with a bowling pin ― in order to get what he wants.
In most cases, what he wants is oil, and the money that comes with it.
From his greedily gleaming eyes to the distinct, rolling cadence of his highly enunciated diction, Plainview is quite the character, and Day-Lewis does a spectacular job bringing him to life. He definitely earned his best actor Academy Award with this star turn.
But Day-Lewis isn’t alone in his outstanding performance. While There Will Be Blood has a large cast, Plainview and two other characters remain firmly at its core. Paul Dano and Dillion Freasier, both decades younger than Day-Lewis, play these two other characters. With their ability to hold their own opposite the seasoned Oscar winner, I’d say they’re nothing short of prodigies.
In his last performance, Dano, 23, played sullen teen Dwayne in the very different but very good “Little Miss Sunshine” (2006).
This time around, Dano as Eli Sunday (he also makes a brief appearance as Eli’s twin brother Paul) is nearly unrecognizable. Well, except for that unmistakable heart-shaped face.
But the change in character is astounding. Eli, a screeching, fire-and-brimstone amateur pastor, is Plainview’s foil. Plainview swindles the Sunday family out of the profits to be made on their oil-rich land, and Eli’s the only one willing to hold the oil tycoon accountable.
The resulting struggle is an all-out brawl in which the respective sides switch off in scoring hits. And we’re not talking mere caustic conversations; Eli and Plainview slap each other around on the oilfield, on the pulpit at Eli’s clapboard church and in Plainview’s home.
In these scenes, Dano seems to conjure up the Holy Spirit himself in all his vengeful, sinner-shaking glory.
Then there’s the very young Dillon Freasier, who plays Plainview’s son, H.W. Freasier’s age isn’t readily available on the Internet, but I’d estimate that he’s about 12.
Once injured in an accident on the oilfield, H.W. is increasingly abused. Freasier is remarkably effective as he screws up his little face into slighted scowls when confronting his father.
So now that we know the actors in There Will Be Blood are great, is the movie as a whole any good?
Director Paul Thomas Anderson’s crafting of the film dovetails nicely with the subject matter.
Anderson has a way of keeping the tension bubbling beneath the surface until it explodes into view like an oil gusher. Radiohead guitarist Jonny Greenwood’s score is also haunting. At times heavy on the percussion, then shrill strings at others, the music taps into the film’s dark aura.
There Will Be Blood won’t leave you feeling good. But it does serve as a reminder of the thread of avarice that has been woven deep into civilization.
Even now, in a different era, life continues to revolve around oil.

There Will Be Blood
Drama / English
158 min.
Now playing