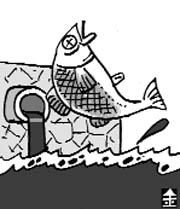 On June 22, 1969, Americans were shocked to see a river on fire on the TV news. The fire, which started when a blowtorch ignited debris and oil floating on the Cuyahoga River in Ohio, spread to become a major conflagration that consumed seven bridges. This led to the establishment of Earth Day on April 22, 1970. It spurred the United States Congress to enact laws mandating clean air and clean water.
On Nov. 1, 1986, a fire erupted in a storage room of Sandoz Chemical of Basel, Switzerland. About 1,300 tons of poisonous chemicals, including insecticides and disinfectants, were stored there. The fire should have been put out using methods appropriate for a chemical factory, but that was not done. Firefighters only kept spraying water. Poisonous substances flowed into the Rhine River, killing 500,000 fish.
On Nov. 13, 2005, an oil chemical factory in Jilin, northeastern China, exploded and nitrobenzine flowed into the Songhua River. Drinking water provisions were halted, affecting 3 million people.
All over the world, the contamination of rivers continues. Since the birth of human civilization, rivers have been a lifeline which brought prosperity, but people have responded by polluting them. In the summer of 1858, the British Parliament had to temporarily adjourn because of the stench from the Thames River. We are now debating whether the Han River water is first or second in quality, but in the 1960s and ’70s when there were no sewage facilities, the pollution was much worse.
The Nakdong River was recently polluted with phenol. In January 1994, it was also contaminated with benzine and toluene. The river basin is densely populated with many factories and pollution accidents are always a possibility. The problem is aggravated when the river shrinks in the winter and pollutants flow into it in the spring.
Since a phenol accident 17 years ago, the government installed automatic water quality monitors at 17 sites designed to prevent pollution early on. These machines, which automatically monitor and display water pollution levels on a 24-hour basis, cost $527,000 a set. But they were pretty useless in preventing the recent accident. Only one machine can monitor phenol pollution and it only works when the pollution level is extremely high.
The pollution of rivers continues without any fundamental solutions. It is small comfort that damage from the fire in a chemical factory in Chungwon, North Chungcheong was contained by pumping out pollutants throughout the night to prevent contamination of the Geum River. But the worry is that as time flows, our readiness will again slacken. envirepo@joongang.co.kr