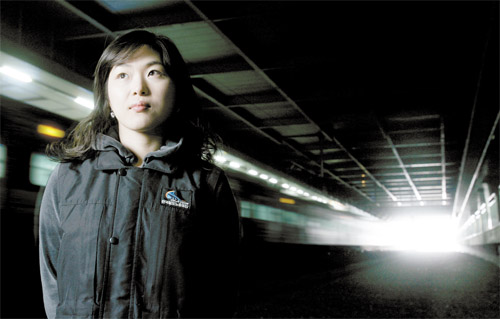 Oh Mi-sun, left, and other former KTX attendants are demanding that the Korea Railroad Corporation hire trained attendants directly instead of outsourcing their recruits. By Jeong Chi-ho

When walking down the stairs of Yongsan Train Station on Thursday morning, Oh Mi-sun, 29, didn’t look much different from other women her age.
She enjoys Starbucks and shopping, but for Oh there are more important matters at hand ― a labor struggle.
This month marks the second year of the long labor dispute between former female KTX attendants and the Korea Railroad Corporation, or Korail.
In the last two years they have demonstrated on the street, been arrested by the police and tried to express their sense of injustice by camping out in front of Seoul Station. The women ended their tent protest earlier this year.
The 400 female attendants, including Oh, worked for Korea’s new bullet train. They went on strike, saying they were misinformed about their employment conditions.
According to claims made by the women, when they were hired through a subsidiary of the corporation, they were told that their employment status would be upgraded to regular workers after a year at the company. The KTX women were hired as irregular workers on short-term contracts when the first Korean bullet train went into service in 2004. The women were on one-year contracts that were renewed every year. Because they did not return to their jobs before the contracts expired, they were no longer employees of KTX, according to Korail.
Lee Eung-dae, a public relations official at Korail, said the claims of former KTX attendants are untrue.
“In the contract there was no mention that irregular workers hired by Korail Retail (the subsidiary of Korail that hired the train attendant) would upgrade their status as regular workers after a year of service,” said Lee.
Lee added that some of the women who were on strike now work at the railroad corporation’s affiliates.
“Not all are still protesting,” he said, adding that the rail corporation is not responsible for the recruitment of the women since it is an issue between the former KTX attendants and the subsidiary that hired them.
In many cases in Korea, irregular workers are hired through outsourcing firms contracted by major companies.
Irregulars typically have limited access to benefits, including the national pension, employment insurance, health insurance and workers compensation insurance.
Eun Soo-mi, a researcher at the Korea Labor Institute, said one of the biggest labor issues irregulars face is wage discrimination.
“These people work the same hours as regular workers, but their wage is almost half of what regular workers receive,” Eun said.
“This unjust business practice surfaced publicly when the short-term contract workers at E.Land went on strike last year; while regular employees received a monthly paycheck of 1.2 million won [$1,253], the irregular workers only receive 800,000 won per month,” Eun said.
The issue of short-term workers has been growing in Korean society according to experts, especially since the financial crisis of late 1997, when the country’s foreign exchange reserve almost ran dry.
During the last five years of the Roh Moo-hyun administration, the Korean economy has been relatively healthy. The primary stock market passed the 2,000 mark in late 2007 and has sharply increased from the 590 mark in February 2003. Foreign exchange holdings jumped from $123.9 billion in February of 2003 to over $261.8 billion in January of this year. Even the national income spiked from $12,717 in 2003 to over $20,000 last year.
Korea also has a low unemployment rate of 3.6 percent, according to 2007 data from the Organization of Economic Cooperation and Development. By comparison, Canada has an unemployment rate of 6.3 percent, France 9.8 percent, Germany 10.4 percent, Japan 4.3 percent, the United States 4.7 percent and the United Kingdom 5.4 percent.
That data seems positive, but in Korea the number of contract workers increased from 4.6 million people in 2003 to 5.7 million last year.
“Korea may have a low unemployment rate compared with European countries, but that doesn’t necessarily mean that Korea has a stable employment structure,” Eun stressed. “Europeans have a higher unemployment rate because they have a larger number of long-term unemployed resulting from various social benefits, which doesn’t stimulate people to find new jobs,” Eun added. “In Korea there are hardly any long-term unemployed people because the Korean social structure doesn’t allow for extensive unemployment.”
Kim Kyung-ran of the Korean Confederation Trade Union, one of the two major labor unions in Korea, said, “The problem in this country is that there are too many irregular workers.” 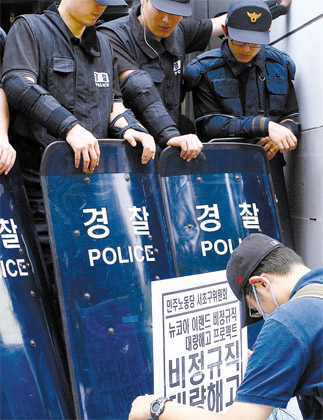 An irregular worker of E.Land demonstrates in front of police in July 2007. The issue of irregular workers have been a long-time problem in Korea, according to experts. [JoongAng Ilbo]

“There are 8.6 million irregular workers, which accounts for 54 percent of all workers in Korea,” Kim said. “Other parts of the world do not have that large of a percentage of irregular workers.”
Kim said the figure provided by the National Statistical Office was smaller because the government has not included some workers the union says should be considered as irregulars.
The biggest problem with irregulars, according to Kim, is discrimination against them. “Since the financial crisis of the late 1990s, people worked for companies even though they were underpaid because they needed a job, and many companies were cutting down on human resources,” Kim said. “This system has been practiced by major companies, even though their business has improved over the years. The only ones benefiting from this labor system are the big companies.”
Eun of the Korea Labor Institute says the irregular worker system in Korea is a serious issue that needs to be addressed because it could lead to larger problems for the Korean economy.
“Contingent workers have less loyalty to a company and less ambition, because of their lack of job security. This will lead to a reduction in product quality and development by companies, and eventually degrade the nation’s competitiveness,” Eun stressed.
The researcher noted a possible link between the hiring of irregulars and the January warehouse fire at Korea 2000, a logistic company, that killed 40 people.
“The people working at the warehouse were hired by an outsourcing company that had a contract with Korea 2000 [a logistics company],” Eun said. “Because Korea 2000 did not hire directly, but through an outsourcing company, it didn’t have to take responsibility,” Eun said.
“Currently, many Korean companies practice similar recruiting where they outsource for irregular contract workers,” Eun said.
“This is a system not common in other parts of the world. The problem that surfaces is that the company rarely takes responsibility because it didn’t directly hire the workers,” Eun said.
Eun said two fundamental problems in the Korean employment structure became visible after the economic turmoil of the late 1990s.
First, instead of solid regular jobs, the number of jobs that are insecure and pay minimum wage have increased dramatically.
“Between 2001 and 2007 the growth rate of regular employment positions increased by almost zero percent, while positions for contingent workers have gone up by 56 percent,” the researcher said.
Eun stressed that the Korean labor structure lacks an employment strategy to break the cycle of increasing numbers of irregular workers.
The second problem is that there is no policy to increase the number of high-quality jobs high with good job security.
“I’m not saying that there should be corporate restructuring,” said Eun. “However, in this country, corporate restructuring means cutting back on labor costs instead of trying to find other ways to improve company management.”
Such practices have taken root in Korea because after the financial crisis, firms learned that it was more profitable to use cheap labor through outsourcing, Eun insisted.
The Korean government reformed the labor law in 2006. The new law says that an irregular worker must be upgraded to regular worker status after working for a company for two years.
Kim of the labor union, however, said such a system only creates a loophole for conglomerates to continuously use cheap labor by hiring and firing irregulars.
“The company wants to keep labor costs low, so what they do is find ways to fire the irregulars instead of upgrading their status to regular workers,” said Kim.
“The government should have first created a system that would protect irregulars before they moved on with the reform bill.”
Eun said that in Korea, once you become an irregular worker, you are forever an irregular.
Lee Hyung-joon, in charge of legal issues at the Korea Employers Federation, said the irregular employment system is the result of an inflexible job market in Korea that restrains companies.
“Private business does not always thrive,” said Lee. “Companies sometimes face difficult times and to survive have no other choice but to seek irregular workers, because offering a regular position is especially difficult with the high wages they demand.”
As for Oh, her fight has become much harder recently because there are only 80 people left in the struggle. Some have moved on with their lives.
Earlier this year, the board of the train corporation decided not to accept an agreement that the two sides had narrowed down recently. The remaining 80 women, instead of getting their old jobs back, were offered jobs as station attendants.
However, at the last minute the board decided not to go through with the deal for three reasons: opposition from regular workers at Korail, limited openings and the impact it could have on employees at company affiliates.
The last reason, especially, could be a problem for Korail. Working at a state-owned corporation in Korea means better job security than at privately owned firms. Allowing the women to become regular employees may be unfair to other employees at the railroad firm’s affiliates, where job security isn’t as solid.
Additionally Lee Chul, president of Korail and the man at the center of the labor dispute, retired earlier this year, leaving the issue unresolved.
Meanwhile, former KTX attendants are tiring. “The most difficult part is trying to keep hope alive,” Oh said.
Oh said if she gets her old job back she won’t stop fighting against injustice to workers.
“There are people in worse conditions then we were in,” she said. “It wouldn’t be right for me to ignore their situation. The KTX attendants who have fought so long believe our example will give strength to others in need of help.”