Snob? Get over yourself

Snob? Get over yourself 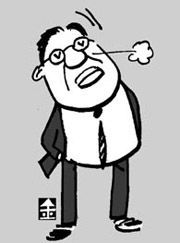 A snob is a person who adopts the view that people are inferior to him for reasons of intellect, wealth, education or ancestry.
A snob adopts the views and lifestyle of a social class of people to which they aspire but do not yet belong.
The word is thought to originate from the Latin “sine nobilitate,” which means a person without nobility. People wrote “sine nobilitate” next to the names of students on candidate lists for entrance exams at Oxford and Cambridge universities, with the idea of distinguishing civil students from noble people.
Snob has carried the negative connotation that we now associate with the word since the mid-19th century.
In civil societies where the status system was destroyed and principles of free competition and equality were instituted, the word “snob” was used to describe the social tendencies of people who could not see others as they were and tried to judge them based on their social status, financial situation and cultural “refinement.”
The great masters of modern literature ― such as Stendhal, Marcel Proust and Fyodor Dostoevsky ― have dealt with snobbism and self-alienation in their masterpieces. The in crowd. The haves. The have-nots. Low-brows and high-brows. The eternal vain pursuit of superficial sophistication. What’s it all mean?
The French literary critic Rene Girard is widely considered to be a man of keen insight, due to his famed theory, “the triangle of desire.” He insisted that snobbery intrinsically lies not in the shallow-mindedness of external attitudes, but in the desire that people depend on. Snobs have an obsessive desire for what others’ desire and do not realize it. They live in a closed triangle of eternal desire, as they never realize what they really want.
Professor Kim Hong-jung wrote in a recent issue of the quarterly magazine “Social Criticism,” that a “snobocracy” refers to a society where people are asked to adjust to the lifestyle of snobbery with no justifiable cause.
He added that snobocracy is the latest ideology in Korean society. “Get rich” became the most common well-wishing remark.
The unlimited pursuit of secular desire has established itself as the spirit of contemporary Korean times. Professor Kim also wrote, “The feeling of secular people about snobbism is quite controversial. They decide to be a snob themselves, and desire to enjoy a comfortable and abundant life. However, the desire is not voluntary but driven by an imperative need to survive.”
This reflects how shallow our reality has become.