Prison visit stirs memories of pain during the occupation

Prison visit stirs memories of pain during the occupation 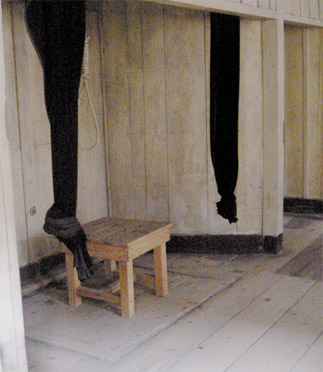 Grim memories from a darker time: The execution chamber at Seodaemun Prison. By Brian Lee

Seodaemun Prison Park is a good place for a walk and some history lessons that even some South Koreans may have forgotten over time.
The Japanese used the prison to suppress the country’s independence movement during the colonial period (1910-1945). The outer walls of the prison were dismantled and moved to a facility Gyeonggi Province in 1987, but some portions have been left intact and serve as an entrance to the park.
Behind a red brick wall with a watchtower, visitors first see the administrative building that used to serve as a guardhouse for the prison. There is a special exhibition here about Korea’s independence movement during the colonial period. The exhibition is scheduled to run until August. Hours are from 9:30 a.m. to 6 p.m. with an admission fee of 1,500 won ($1.58) for adults.
On the first floor is a video room where a seven-minute film tells the story of the prison, which was designed by the Japanese and opened in 1908 as Gyeongseong Prison. It underwent several name changes and building extensions until it could eventually house 500 inmates.
Also featured are a special exhibition room, with exhibits of artifacts and data about the country’s independence struggle and persecution by the Japanese colonists. You can see personal letters written by some of Korea’s prominent independence fighters plus profiles of the people involved.
The second floor features wall coffins that were used to torture prisoners. These special cells were only big enough to fit a standing adult. They were often used to break down the will of inmates to extract information. Imprisonment here could paralyze a person in a few days.
The National Resistance Room displays graphics and chronological data on significant events marking the resistance against the Japanese, while showing the overall prison situation during the occupation.
The basement provides a glimpse into prison life at the time, a sight made more eerie by the presence of wax statues in the torture rooms, execution grounds and detention rooms.
Be prepared to hear simulated recordings of screaming prisoners and the yells of their Japanese torturers, who are depicted sexually assaulting female prisoners.
After a crash course on the prison’s history and what went on behind the walls ― including information on Korea’s nationalist March 1st Movement ― the tour of the prison begins behind the administrative building.
Seven buildings out of the original 15 have been preserved. A guided tour is provided in English, Japanese and Chinese. You can walk inside the cells on the first and second floors of the three main prison buildings, which are all adjacent and connected.
The overall lighting is dim and the inside of the building chilly, just what you would expect of a prison. Heavy wooden doors guard each entrance of the cells and you can capture a sense of the dark past in the bare stillness around you.
Exiting prison building 10, you’ll see the lepers’ building, which is now closed. It served as a separate prison building with three cells for inmates suffering from leprosy or other incurable diseases. To the left, about 50 meters away, is the execution building, a place that truly makes one somber. Surrounded by a stone wall, the building is a wooden structure built in 1923 and is designated as National Historic Site No. 324, along with some of the other prison buildings.
Inside you can see a chair with a rope above it and a couple of seats for the witness panel. 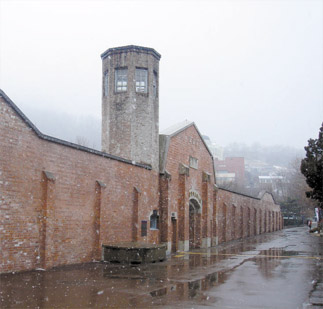 The entrance to Seodaemun Prison Park. By Brian Lee.

Next to it is a secret exit which was used to transport the executed prisoners to a public cemetery outside the prison. To protect the building, the public is not allowed inside.
There are underground cells next to the administration building that lay undiscovered until the early 1990s when the prison was turned into a memorial park.
These underground solitary cells were used to imprison female inmates. Yoo Gwan-soon, a heroine of the independence movement, is said to have perished here in 1920.
At the height of colonization, the country had a total of 17 main prisons with 11 subprisons spread across the country. Seodaemun was at the center.
Interestingly, the museum does not tell visitors about the use of the prison after the country won its independence in 1945. In fact, the prison was used until the 1980s.
The prison was first opened to the public as Seodaemun Independence Park on Aug. 15, 1992.
All in all, the Seodaemun Prison is definitely worth visiting to get a basic understanding of an essential part of Korea’s history and the suffering Koreans endured under Japanese rule.
The execution chamber and the tunnel next to it were the climax of my visit.
This is an hour’s walk that compels you to reflect, whether you are a Korean or simply a tourist.