The wisdom of cultural preservation

The wisdom of cultural preservation 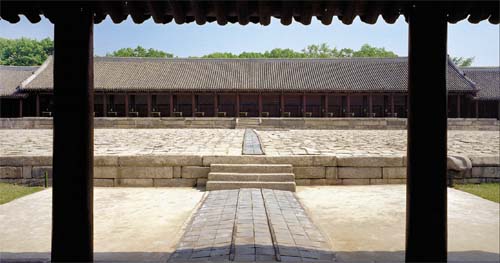 Jongmyo, a confucian shrine in central Seoul where royalty in the Joseon Dynasty held rituals for gods and ancestors, is one of Korea’s cultural assets that needs better care, experts say. [JoongAng Ilbo]

Master carpenter Shin Young-hun, 73, the head of the Hanok Cultural Institute in Gahoe-dong, central Seoul, was one of the main artisans who helped restore Sungnyemun ― less formally known as Namdaemun ― in 1961.
The gate went through extensive renovation at the time because the timber was in such bad condition. The structure had also been damaged during the Korean War (1950-1953).
“Cultural experts did not work for the money in those days,” Shin said. “They worked out of a great sense of devotion to bringing Sungnyemun back to life because the structure has been a symbol of the Joseon spirit since 1398,” he said.
Shin was joined on the project by Lim Chun (1909-1965), former head of the Cultural Properties Committee, and Lee Gwang-gyu, Ki Sun-gil and Han Suk-sung, all expert artisans.

Lee, Ki and Han were responsible for restoring the main building, tiles and paintings, respectively, investing a huge amount of energy and time, Shin recalled.
They hoped the restoration project in the early 1960s would be the last of the century for Namdaemun. But 47 years later, the famous gate is once again undergoing treatment. The fire last month was devastating to the physical structure of the building, as well as to the hearts of people living in Korea.
Shin said the new Namdaemun project needs careful handling because traditional Korean culture is already losing its identity and status due to the influx of different building practices. The burning of Namdaemun has become a wake-up call for the country, he said.
Over time, for example, different units of measurement present a dilemma. “The question today is whether or not Namdaemun should be restored according to Western measurements like centimeters and inches or older traditional units,” Shin said. 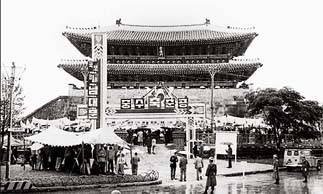 Materials and tools also changed. These days workers need to replace mass-produced tiles frequently. Tiles today easily lose their shape and weaken.
“The tiles that were restored before the 1960s retained their original shape,” Shin said, adding that tiles from the 1960s have already started to warp.
In the past, people used hand-held lathes and planes but now architects use power saws.
“Naturally, the surface texture of the wood will feel different,” Shin said. “The fine grain becomes coarse.”
Transportation techniques have also changed, affecting the quality of the materials. Workers used to float logs downriver from Taebaek in Gangwon to Seoul, a cheap method of ferrying wood to the construction site.
“Our ancestors were wise,” Shin said. The water washed away insects and other substances and helped harden the timber by the time it arrived in Seoul.
“That’s why wood from the past doesn’t decay as much,” Shin said. “And that’s why the research group in charge of restoring Namdaemun should comprise cultural experts who know both modern and ancient building techniques.”
Having lost Namdaemun, Korea’s premier national treasure, Shin said other cultural assets should be examined carefully to ensure they are properly protected. The fact is that despite their historical value and cultural symbolism, many similar cultural assets have gone unnoticed and uncared for.
Hwang Pyung-woo, head of the Korea Cultural Heritage Policy Research Institute, said a case in point is Hwangudan, an important historical site that deserves better attention. 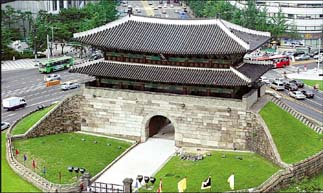 A shot of Namdaemun days before it burned down. [JoongAng Ilbo]

Hwangudan was built in 1897, where the Westin Chosun Hotel now stands in central Seoul, as a site for Korean kings to offer sacrifices to heaven.
When the Japanese pulled down the Railroad Chosun Hotel and rebuilt it as the Westin Chosun in 1914, Hwangudan remained as the hotel’s main entrance.
But when the hotel was rebuilt and expanded on the orders of President Park Chung Hee in the late 1960s, the gate was moved to Green Park Hotel in Ui-dong, northern Seoul, where it fell into disrepair, according to Hwang.
Hwang said he has urged the owners of the Westin Chosun Hotel to restore the main gate, but to no avail. One problem is that the original gate was raised from 155 centimeters to 190 centimeters. The low ceiling used to inconvenienced tourists, who would bang their heads on it.
“The low gate represented humility since hotel visitors had to lower their heads as a gesture of modesty,” Hwang said.
What remains at the former site of Hwangudan, also known as Wongudan, is Hwangungwoo, a three-story octagonal pavilion built as an ancestral tablet.
“Hwangungwoo is a national symbol, but it now just looks like landscape architecture,” Hwang said.
When Hwang visited the Green Park Hotel he found the site to be in terrible condition. The hotel was closed down and buses used the grounds for parking space.
“People are going to look back with regret when places like Namdaemun get destroyed,” Hwang said, likening the gate to an emergency patient in need of urgent treatment.
He urged the Cultural Heritage Administration and Seoul City to examine the gate immediately and move it back to its original location in the grounds of the Westin Chosun Hotel.
Photography is one way of encouraging greater awareness of cultural assets, reminding people of the past.

ArtSongje Museum in Anguk-dong, central Seoul is currently hosting “Scent of Hanok: Commemorative Exhibition of Kim Dae-byuk.”
The exhibition displays photographs of 31 traditional houses and royal palaces, such as Jongmyo (Royal Shrine), Gyeongbok and Changdeok.
“I don’t take photographs of hanok [traditional houses] as mere architecture,” Kim wrote. “I’m moved by how people in the past worked to harmonize houses with nature. They tried their best to remove any sense of artificiality.”
Shin of the Hanok Cultural Institute accompanied Kim on a trip to take pictures of Namdaemun back in the 1990s.
“We [Shin and Kim] went to the site early in the morning, but there wasn’t much light so Kim was kept waiting. He eventually took just one photo.”
That photograph is not on display at the current exhibition at ArtSongje Museum. Instead, it has been printed on a set of postcards, which the museum uses as flyers and as a token of remembrance of the recent fire.
Photographer Joo Myung-duk, who organized the exhibition at ArtSongje Museum, said, “Kim emphasized the importance of recording and preserving cultural assets.”
Bae Byung-woo, a fellow photographer agreed.
“Artistic photographs fade away as time passes, but historical photographs remain forever,” Bae said.