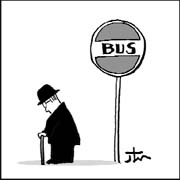 Toshio Doko (1896-1988) was chairman and CEO of Toshiba Corporation and a chair for Nippon Keidanren.
Despite his lofty position in society, he chose to live a frugal life, refusing to use a luxury car with a driver. One day, prosecutors showed up at his house to investigate allegations surrounding a corporate merger. His wife said to them, “Go to the bus stop. He’s probably there.”
The public prosecutors rushed to the bus stop and, finding Doko there, asked him some questions. They soon decided that he was above suspicion.
The prosecutor later said, “I was assured that he was innocent, seeing how humble his life was and watching him waiting for the bus at dawn.”
While Doko was chairman of a committee for deliberating on administrative reform, the government price for purchasing grain emerged as a point of dispute. Then-Prime Minister Yasuhiro Nakasone had heated up the situation by making inflammatory remarks.
Instead of defending his position, Doko decided to step down from his post. “I am so old that I cannot live in the 21st century,” he said. “However, I do not want to leave such a country to my descendants.”
Nakasone paid a personal visit to Doko’s house. He kneeled down and politely turned down the resignation in Doko’s small home, a scene telecast live via satellite.
That year, the Japanese government froze the grains purchase price for the first time. There was no farmers’ resistance at all. In addition, Nakasone’s approval rating soared, and he succeeded in gaining an absolute majority in the general elections.
Cutthroat competition is still underway to gain party nominations for parliamentary candidates. Two chairmen ― who are responsible for reviewing the nomination process at the Democratic and Grand National parties ― have become topics of conversation. Incumbent lawmakers quake in their boots in the face of the authority exercised by these two people. The shakeup in the nomination process has already jumped on the bandwagon of public aspirations. If someone tries to insist on assigning seats depending on political factions or securing vested rights, that person will lose both capital and interest.
In this regard, it would be better to learn from Nakasone’s wisdom. It would be the right path to accept the reformative party nomination, kneeling down to accept the party’s decision, with the view to expand the scope of the political foundation. Of course, it should be based on the premise that the reviewers should be impartial deciders, like Doko.