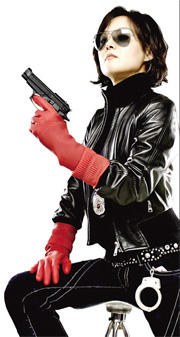 Call it ajumma power.
Ajumma is Korean for middle-aged women, and ajumma characters are currently in full control of the screen ― both television and film.
But they are no longer portrayed as aggressive or hot-tempered, for example, as a woman dashing for a vacant seat in the subway or elbowing other ajumma for the last grocery item on sale. They no longer wear loose floral-print pants or sport curly hair.
Their aggressiveness is presented rather as an endearing trait ― as enthusiasm for life and full tolerance of others.
Jung-geum (played by Bae Jong-ok) from MBC TV’s “The Unique Park Jung-geum” is one example.
Jung-geum is a 38-year-old detective in charge of investigating violent crimes and a single mom living with a child. Her divorce transformed her into an uncompromising, tough woman.
In one episode, she shouts fearlessly at a knife-wielding gangster, “Stab me if you can. I’m just ashamed that I have to deal with a loser like you.” The gangster turns tail and flees.
Lee Hyung-seon is the producer of Park Jung-geum.
“In the past, divorcees were typically cast as characters who owned a flower shop or a grocery store,” Lee said.
“Making Jung-geum a detective was an attempt to break the biased view people have toward Korean ajumma.”
Other ajumma in the spotlight are Bok-soo (Kim Hye-sun) and Hwa-sin (Oh Hyun-kyung), two lead characters in SBS TV’s “First Wives’ Club.” Viewers like the characters ― the weekend drama has attracted an average of 25 percent of viewers watching television.
MBC TV’s “Last Scandal,” which aired its first episode last Saturday, also features a 39-year-old ajumma ― Seon-hee (Choi Jin-sil).
She becomes a single mom overnight when her husband dumps her for another woman.
Seon-hee, now the head of the family, is portrayed as brave and intelligent. She has two jobs ― a part-time maid and a voice-over talent at a broadcasting station.
In the show she was pretty in high school but due to life’s trials, Seon-hee has let herself go. 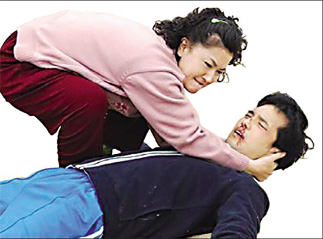 “The spiritedness of modern housewives does not just include rebelling against their mothers-in-law,” said Moon Hee-jung, the drama’s scriptwriter. “They [modern housewives] contain a progressive spirit.”
The character Seon-hee was created to bring out an active and positive ajumma.
“The fact that ajumma are spotlighted on TV and film reflects society’s growing interest on the special force that ajumma have ― their activeness, comprehensiveness and problem-solving abilities,” said Lee Tae-gon, the producer of Last Scandal.
Film columnist Lee Yun-jung agrees. She says the greater role ajumma have on screen reflects their larger role in real life.
“Compared to the past, housewives play a greater role in families today,” Lee said.