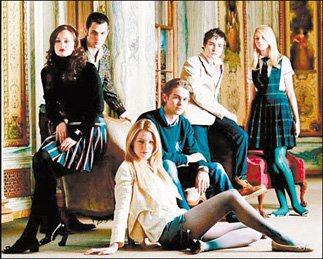 “Gossip Girl” peeks into the lives of privileged New York teenagers.? [On Style]

The best and worst backpack I have ever owned was a totally unfashionable crimson color with a too-big-to-be-missed logo.
“Korea University” it said.
I would never dare use that boorish bag now, but I was a 19-year-old freshman, thrilled to have won a place at a “SKY” university in Korea.
SKY stands for the most prestigious universities here: Seoul National, Korea and Yonsei.?
My pride was a little overbloated in those days. I felt I had earned my spot all by myself, whereas the parents of other kids were rich enough to afford high-cost private tuition or send their children overseas to study.
Go ahead, readers, call me and my backpack superficial.???
Still, I have always refused to wear Harvard or Yale university sweatshirts, unlike many Koreans here. They wear them not because they are alumni but because they are alumni hopefuls.?However, I am old enough ― though perhaps not wise enough ― to understand why my younger sister says a university diploma is just a piece of paper that rarely reflects a person’s true nature.?
Mind you, she’s a student at Seoul National’s medical school, perhaps the most prestigious institution in Korea.
Needless to say, I and many of my alumni friends heartily agree with her. But more than enough Koreans taking their first steps into the marriage market still prioritize SKY badges and high salaries, rather than personality.
Even so, I have met lots of people who do not wear a SKY badge but still excel in capability and talent. They are self-made people, who started at the bottom eating stale bread and sleeping badly, but rose to the top.?
Maybe this is why I am displeased with “Gossip Girl,” a U.S. series new to cable TV here.
Airing Monday and Tuesday nights at 11 on OnStyle, with reruns at Saturday midnight and Sunday 2 p.m., Gossip Girl takes viewers to the fancy world of pampered teenagers living in upscale apartments in New York’s Upper East Side.
Of course, there’s one character who is a gossip ― she seems to make it her full-time occupation ― and lots of spoiled brats on show.
But the producers are shrewd enough to include more ordinary characters with whom plebians like me can relate.
They are actually the cutest people on the show, getting into complicated love triangles with Upper East Side girls, romances that remind them these guys are often out of their league.
This is what irritates me about this show. I know it is woefully naive to say life is fair, but this series exploits the social caste system, emphasizing the haves and the have-nots.
You know, I am sure many viewers after watching this show think about putting a Louis Vuitton bag on their credit card, acting out a TV fantasy.??
Another irritation comes from the sales strategy of OnStyle. The channel links Gossip Girl to the legendary “Sex and the City” series.
I loved that series, not because of the expensive Manolo Blahnik shoes that Carrie wore, but because of the friendship between the four 30-something women. Any woman can relate to them.
So far Gossip Girl is enjoying a free ride on the New York brand, with trailers on OnStyle that say, “We, the Upper East Siders don’t have to study to get into the Ivy League, because we have the networks” or “An exclusive Sunday brunch with a glass of luxury champagne is just a routine Sunday for us.?Do you envy us?”
Well, my answer to the last question is “Hell, no.” And I am heartily glad that now I am done with this review I don’t have to tune into this show any more.?
So long, Gossip Girl.