[Talk of the town] Warner Bros. chases success of ‘Chaser’

[Talk of the town] Warner Bros. chases success of ‘Chaser’ 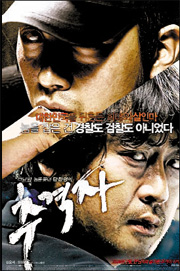 Na Hong-jin’s thriller “The Chaser” has attracted more than 3.5 million viewers as of last Friday, and Hollywood’s Warner Brothers Entertainment is now tapping into that success.
Fine Cut, the local company in charge of the film’s foreign sales, announced that Warner Brothers bought the rights to the film for $1 million last Wednesday to do a remake.
According to a Hollywood report, novelist-turned-screenwriter William Monahan is currently discussing the film’s adaptation.
Leonardo DiCaprio is rumored to be in talks over taking on the lead role ― originally played by Kim Yun-seok.
Monahan wrote the screenplay for “The Departed” (2006), a remake of Hong Kong’s “Infernal Affairs” (2002).

‘Ultimate Challenge’ takes to skies
Fans of MBC TV’s variety show “Ultimate Challenge” may be able to watch the show in the air soon.
MBC announced last Friday that the company has offered the first four episodes of the show to foreign airlines, including Air France and Qatar Airways, which fly in and out of Korea.
Meanwhile, MBC’s hopes of exporting the show to Sweden have been dashed. The purchasing agency from Sweden said recently that too much of the show’s content is difficult to format. 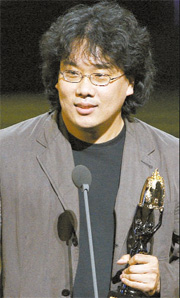 ‘Host’ director to judge in Belgium
Director Bong Joon-ho had better give his glasses a good shine. As one of the newly named international jurists at the 26th Brussels International Fantastic Film Festival, Bong will need them to screen films.
He will judge 11 entries, including Korea’s “Gidam” (2007), Japan’s “Ekusute” (2007) and China’s “Gong Tau” (2007). The festival runs in Belgium from March 27 to April 8.
Bong is best known for “The Host” (2006), the most successful Korean film to date.

North Korean defector crisis of 2002 hits movie screens in ‘Crossing’
Director Kim Tae-gyun will unveil his film “Crossing” ― about North Korean defectors ― at a production briefing next Tuesday.
The plot revolves around a 2002 incident in which North Korean defectors tried to enter the Spainish Embassy in Beijing.
In the film, a defector (Cha In-pyo) leaves North Korea in search of food and medicine for his family. The defector’s 11-year-old son (Shin Myung-chul) sets out to search for his father.
The film’s release date has not yet been set. By Lee Eun-joo