Is hanky-panky a crime?

Is hanky-panky a crime? 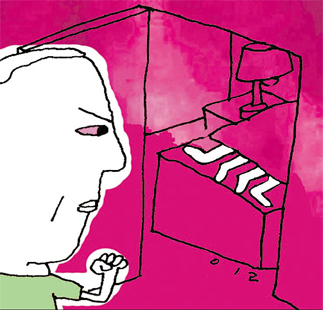 Confucianism is still deeply rooted in many corners of Korean society and adultery is a crime punishable by law. Nevertheless, a high-profile case involving celebrities here could put a dent in a law that has been in place since 1953.
Former actress Ok So-ri and her husband Park Cheol, a renowned radio host and actor, are providing the catalyst for change. The Constitutional Court has been asked to rule on whether the adultery case in question is constitutional.
Park filed for divorce last October citing adultery, and later that same month sued two men ― an Italian who has since left the country and a South Korean. The following month, Ok filed her own suit demanding custody of their children and compensation.
Their case is currently on hold pending the Constitutional Court’s decision.
The celebrity couple’s fight has dominated the nation’s tabloids. Both Ok and Park were happy to feed reporters colorful stories about their sex life ― or rather the lack of it ― which was one of the reasons their marriage floundered, according to Ok. 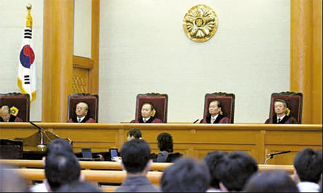 The Constitutional Court has ruled in the past that the adultery law in Korea is constitutional. [JoongAng Ilbo]

The Uijeongbu District Court handling the case said the current adultery law is “clearly limiting the right to self-determine the sex choices of the individual that are guaranteed under the Constitution. The sex life of a human being is confidential and stems from feelings that cannot be forced or forbidden. Thus it is inappropriate for the state to intervene.”
The Constitutional Court announced that the Park-Ok case will be heard in public on May 8. (If the court believes a case will have a profound impact on society, it can hear the case in public.)
While the public is bracing for another round of frenzied media ballyhoo, the issue continues to divide civic groups, lawyers and legal experts.
The Constitutional Court has ruled three times ― in 1990, 1993 and 2001 ― that the law regarding adultery is constitutional. However, legal experts are increasingly challenging prevailing thinking. Last year, two district judges asked the Constitutional Court to provide guidelines on adultery cases.
While the country waits to hear how the Constitutional Court will respond, some commentators have made their views clear.
“I think it’s time to scrap this outdated law,” argues Kim Cheong-bum, a lawyer who has handled adultery cases in the past. “The law should not be used as a tool of revenge, but adultery charges are basically just that.”
Kim says he has seen many cases in which a wife gets her husband jailed on grounds of adultery as a means of extracting a larger financial settlement.
“Some people argue that the law is protecting family values, but where are the family values here? If you put your spouse in jail, how can there be reconciliation?” Kim says. 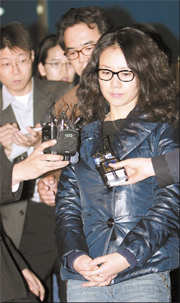 Former actress Ok So-ri wades through a sea of reporters on her way to meet prosecutors during her divorce case. [JoongAng Ilbo]

The lawyer argues that adultery should not be considered as a criminal charge, but left as a civil case.
“In the past, the law was thought to protect women but there is no more need. Many women today have become financially independent, and courts award compensation and divide assets fairly,” says the lawyer.
Kim stuck his neck out and predicted that the Constitutional Court would pronounce that the current adultery law is unconstitutional.
Nine judges make up the court ― three whom the president appoints, three whom the National Assembly elects and three whom the chief justice of the Supreme Court nominates.
Regarding adultery charges, the current law dictates that a person who is found guilty should be sentenced to less than two years in prison. The partner to the adultery is expected to get the same sentence.
Before October 1953, only women could be charged under the law; now both sexes can be charged.
Adultery charges can only be filed with divorce petitions and have to be submitted within six months of one spouse identifying whom the offending spouse had sex with. The statute of limitations for adultery is three years.
The Constitutional Court declared in 2001 that Korea’s adultery laws are constitutional, but when it did so it noted that “the legislative body should consider abolishing the law as it stands after taking into consideration trends abroad, the issue of the law intervening in private affairs and the law’s constantly weakening function as a law.”
The decision was eight to one in favor of sustaining the law.
“To our surprise, legal circles are much more open than the National Assembly to changing the current law,” says Cheong Dong-gyu, an aide to lawmaker Yeom Dong-yong of the United New Democrats. 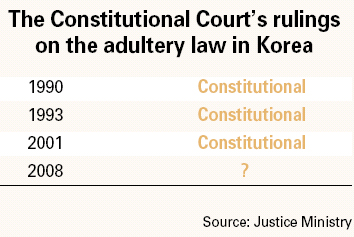 Yeom submitted an amendment seeking to drop the adultery law to the National Assembly’s Legislation and Judiciary Committee in 2005.
“But the lawmakers sitting on the committee are conservative and for them the issue is not pressing, so the case is still pending,” says the aide, who thinks public opinion favors reform.
A survey by RealMeter last month found that 69.5 percent of the 500 people interviewed said they were not in favor of abolishing the adultery law.
Opinions in government seem split down the middle.
“We have said in the past that we are behind abandoning the adultery law,” says Ju Jin-woo, an official at the Ministry of Gender Equality, adding that an official position would be adopted once the minister-nominee is confirmed.
“Last time we checked, the overall atmosphere at the Justice Ministry was to uphold the current law, but as far as we know the Constitutional Court is moving towards favoring change,” says the official.
She argues that the adultery law is actually putting women at a disadvantage. “If a man gets caught, women tend to drop the charges or get a divorce. But if a woman gets caught, she is charged just about every time,” says Ju.
Out of 3,198 adultery cases in 2006, men were victims in 1,593 cases, Ju said.
Neighboring Japan abolished its adultery laws in 1947, while the United States has different rules depending on each state.

According to the Justice Ministry, only 4 percent of the cases in Korea end in prison terms. Suspended sentences are more common. But those favoring the status quo argue that numbers do not tell the whole story.
“There may be a limited number of people getting sentenced but that is because a lot of people reach an out-of-court settlement while the charges stand,” says Yu Woo-chang, a lawyer at Jae One, a law firm that specializes in divorces. “So the law has an impact that cannot be measured simply by numbers.”
By Yu’s estimate, half of the adultery cases in Korea are settled by mutual agreement.
A senior prosecutor at the ministry, speaking on condition of anonymity, admitted that within the ministry some had reservations about abolishing the current adultery law.
“It’s a psychological barrier that keeps people in check. Even with the current law in place you still come across [adultery]. This tool is still needed in today’s society,” says the prosecutor.
“The stability of society is important and it starts with the family as a building block.”