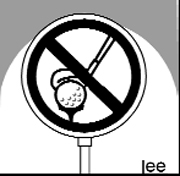 In April 2006, the China Golf Association and the National Palace Museum declared that a game called chuiwan, similar to today’s golf, was popular during the Northern Song Dynasty in the early 12th century. They even presented restored wooden balls and golf clubs at an exhibition as evidence.
It has been widely believed that golf originated sometime during the 14th and 15th centuries in Scotland. But according to China, it gave the world golf. A Chinese book “Wan Jing [Manual of the Ball Game]” published in the 13th century contains detailed rules which are similar to golf rules today. According to the book, all holes are 3-par and players are not allowed to touch the ball except when placing it on the tee and retrieving the ball from the hole. Good manners were regarded as important and players were supposed to see the game from their opponents’ viewpoint so they were strictly forbidden to interpret rules for their own interests.
In the Western world, the oldest official record of golf was made in 1457 in a document commissioned by King James II of Scotland. The document says golfers were so obsessed with the game that they neglected archery practice, deemed vital to national defense, and their religious duties. So the king banned all people between 12 and 50 years old from playing. But the king became addicted to his own handicap, making the bans pointless.
Many former U.S. presidents were keen golfers. Dwight D. Eisenhower created an amateur golf championship in 1958 while he was in office. John F. Kennedy loved golf but said it wouldn’t look good if a presidential candidate who aspires to be a champion of the people plays a sport associated with the rich. When Bill Clinton was in office, a survey revealed that Americans wouldn’t be happy even if the president played golf on his vacation.
In Korea, playing golf has become a yardstick of civil officials’ integrity. Shortly after he was sworn in, former President Kim Young-sam declared that he would not play golf while in office. His declaration was interpreted as a ban on golf. Though the Kim Dae-jung administration didn’t talk much about golf, Roh Moo-hyun administration officials occasionally were reminded to keep the clubs at home.
Recent comments by Yu Woo-ik, Lee’s chief of staff, were taken as a ban on golf. Lee Dong-kwan, the presidential spokesman, said, “It is up to an individual to decide whether it is appropriate or not to play golf.”
Government officials, however, might want to wait. Everyone knows golfers worry about just one thing: their handicap.