Clowns get sent to Siberia for magical snow show

Clowns get sent to Siberia for magical snow show 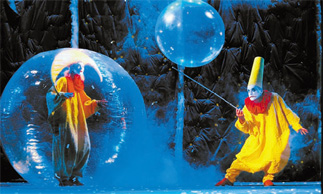 Two of the four clowns that appear in “Slava’s Snowshow.” Provided by the organizer

The stage is completely white, covered with snow.
Four clowns dressed in baggy yellow snowsuits trudge through the snow under a grayish sky that conjures up images of a Siberian field.
One clown produces a mattress, which later on magically turns into a boat. He is filled with the hope of reaching an endless blue ocean ahead.
The other two clowns dance and comically mime to “O Fortuna” from Carl Orff’s “Carmina Burana” and to “Moonlight: Adagio Sostenuto,” Beethoven’s Piano Sonata No. 14.
The remaining clown is at the train station. He is reading a love letter and tears fall from his eyes.
The letter magically turns into snowflakes and soon snow fill the seats in the front of the theater. Suddenly, all the clowns start a mischievous snowball fight with the audience.
Though spring is just around the corner, it is always a winter’s day on stage for Russian clown Slava Polunin.
Polunin founded “Slava’s Snowshow,” this nonverbal performance piece, in 1993.
Three million people in 100 countries have seen the show since it opened in London ten years ago. This time, it’s Korea’s turn.
The LG Arts Center in southern Seoul has staged the show four times since 2001. But each staging is different, according to Seol Hye-sun, the PR manager of Culturei, the company that brought the show to Korea.
“Since the show involves a great deal of audience participation, such as the snowball fight and other responses, each performance has its unique charm,” Seol said.
In a recent press release about the show, Polunin said: “It is theater which always changes, which breathes spontaneous improvisation and cares scrupulously for tradition.”