Grab a Guinness for a St.Patrick’s hooley

Grab a Guinness for a St.Patrick’s hooley 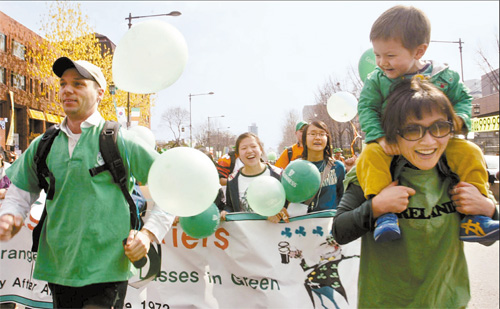 Koreans are widely known as “the Irish of Asia,” but on St. Patrick’s Day, everyone can consider himself Irish.
Seoul’s festivities have already started with an exhibition of Irish photography and culture that opened Monday at Gwanggyo Gallery. Located along the north bank of Cheonggye Stream, the exhibit, hosted by the Irish Association of Korea, runs through Saturday.
The weekend also brings celebration of a more raucous nature. The IAK, working in conjunction with the Seoul city government, launches the Eighth Annual St. Patrick’s Day Festival at Cheonggye Plaza.
“The festival has grown this year,” said Keith Morrison, chairman of the IAK. “We have over 20 people working on our [planning] committee this year, so we can be more ambitious.”
What began as an impromptu gathering in Myeongdong in 2001 has grown over the years, Morrison said. The location changed over time to Itaewon, then to Daehangno last year. “We want to be more inclusive and attract more Korean people,” Morrison said, explaining the IAK’s choice of location.
This year’s festival at the Cheonggye Stream includes Irish food and drink samples, and B-Boy and musical performances. One of the featured bands, Bard, is a sextet of Koreans who play traditional Irish music.
Kim Hyun-bo, who plays the Irish flute and tenor banjo for Bard, said they began playing for the festival last year upon request of a fan who is an IAK member.
“The Irish expats danced to our songs and they got nostalgic,” Kim said of last year’s performance. “The Koreans couldn’t really dance, but they clapped along.”
The festival runs from 12:30 to 6 p.m., with a parade from 2 to 3:10 p.m. Following the festival, the party moves at 9 p.m. to a “hooley,” or Irish party, at Buck Mulligans (02-3783-0004), a pub at the Seoul Finance Center. Reservations are required.
Other hoolies across town on Saturday will be at the Wolfhound (02-749-7971) and Ole Stompers in Itaewon, Hongdae’s Club FF and Ilsan’s Club Metro (010-6428-0248). “I served for 12 and a half hours straight,” said Wayne Gould, a barman at the Wolfhound, about last year. “Don’t let go of your glass,” he advised. “Just bring it up and we’ll give it back with beer in it.”
Those looking for a good, traditionally Irish time, however, need not head to Gangnam’s Dublin Bar (02-561-3281), where the staff is much in need of a leprechaun’s pinch.
And don’t forget: wear green.