Why can’t Korea learn from past disasters?

Why can’t Korea learn from past disasters? 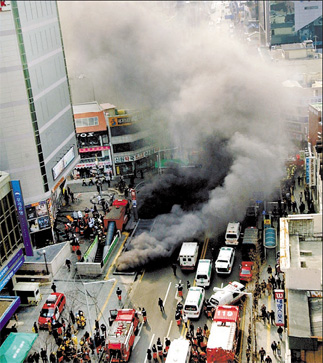 Field hockey star Kim Sun-deok left Korea for good following a devastating fire in June 1999.
The fire, known in Korea as the Hwasung Sealand Tragedy, killed 19 children aged 5 to 7, including Do-hyun, Kim’s eldest son.
The cause of the blaze was attributed to an unattended mosquito coil at a summer camp in Hwasung, on the outskirts of Seoul.
After the accident, Kim turned in her medals. She was a silver medalist with the national women’s field hockey team at the 1988 Seoul Olympics and a two-time gold medalist at the Asian Games in 1988 and 1990.
She did it because the Korean government’s response to the worst fire disaster in living memory had been inadequate, she said.
Her family moved to New Zealand in 2002 and opened a Chinese restaurant called Taehwaru in the suburbs of Oakland, about 500 kilometers south of Auckland.
“If I had stayed in Korea, I would never have forgotten what happened,” said the former Olympian, 42, in an interview with the JoongAng Ilbo. “In Korea, you wake up and there is a new accident every morning.”
Experts say that companies and local authorities responsible for preventing accidents rarely learn from their mistakes and hardly ever publish comprehensive reports on the causes of accidents.
Reports that do get published tend to be full of holes, poorly structured, lacking vital information and leaving too many questions unanswered, they say.
Reports made available on the 20 major disasters that have occurred in Korea since 1993 lack the names of the investigators, while one report was released seven years after the accident being investigated took place.
Twelve out of 20 major accidents that have occurred in Korea since 1993 have not had official reports released to the public.
Only two reports ― on the collapse of Seongsu Bridge in 1994 and the Sampoong Department Store in 1995 ― included standard data such as the investigators’ names, frames of reference and expert comments. Even so, many experts said the contents still didn’t meet the standards of a professional case report.
Both cases registered their reports on the official Web site of the National Archives of Korea and were open to public at the National Assembly’s Library. But the Prosecutor’s Office, which formulated the two reports, still classified the document as secret.
The reports on Sampoong and the Sealand fire were also made available to the public at the National Archives of Korea and the National Assembly’s Library via electronic files.
In other cases where death tolls reached triple digits, no official reports were ever released.
Such cases include the gas explosion in the Daegu subway in 1995 that killed 101 and injured 202, the fire at Naksan Temple in 2005 that melted the temple’s treasures, including its great bell, and the fire at Suwon Fortress in 2006. 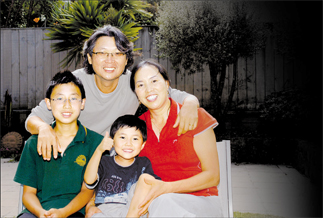 Field hockey player Kim Sun-deok, right, her husband and two sons, Tae-hyun, left, and Si-hyun, now live in New Zealand. Kim’s eldest son, Do-hyun (not pictured), died in a fire at a campsite in Hwasung on the outskirts of Seoul in 1999. [JoongAng Ilbo]

“The fire at a warehouse in Icheon that killed 40 workers in January has a lot of similarities to the fire at Sealand and a warehouse in Busan,” says Kim Ju-hwan, a firefighter in Seoul with 30 years’ experience on the job. “That shows how we have failed to learn from previous disasters.”
For a short while, Korea seemed to pay attention to the serious need for disaster prevention methods. Safety management measures poured in from the legal sector in Korea in 1993 following an Asiana Airlines crash, the sinking of a ferry in the Yellow Sea and a train derailment at Gupo train station in Busan that year.
The National Emergency Management Agency was set up to protect people from recurrence of disasters, including fires, gas explosions and typhoons. But accidents still continued to take place, often triggered by the same safety failures.
“So many major accidents have taken place in Korea, but we have not released proper official reports,” says Hong Won-hwa, a professor of architecture at Kyungpook National University.
In other instances, the sources of the reports were unclear or were not disclosed to the public.?
A gas explosion in Ahyeon-dong, Seoul, in 1994 left 12 dead and 49 injured. But the Korea Gas Corporation declined to release its report, explaining that it was made strictly “for the company’s account,” and could not be revealed publicly because “the person who is responsible for the explosion still works in the company.”
Lee In-sik, the director of the Science Culture Research Institute, says a report for insiders only is not much use.
“A database for all [reports] chronicling accidents is open to the public in Japan. The archives even include incidents that occurred in Korea, like the fire in the Daegu subway,” he says.
Hong, the professor at Kyungpook, was so frustrated by the government’s failure to produce an official report on the Daegu subway fire that he produced his own report at his own expense.
Hong is a member of his university’s fire disaster prevention institute. He waited for the government to step forward and offer to work on the report, but it didn’t, he says.
Shortly after the accident, he gathered a team of 16 students from his university’s master’s and Ph.D programs and started to investigate. He used statements from survivors and published his report in February 2004.
“The government was busy just getting the facts straight,” Hong says, adding that the management of the accident site at Daegu created further problems.
The day after the accident, the city government ordered a clean-up when it heard Kim Dae-jung, who was president at that time, would visit the site. Daegu city government began working on their official report after Hong’s paper was published, but the quality of the reports, many experts noted, was poor.
Hong’s report poignantly illustrates the status of safety regulations in Korea, which the press often dubs the “Republic of Disasters.”
The day after the subway fire in Daegu, Hong visited Joongangno Station, where the accident took place, and asked officials if he could investigate the area in his capacity as a state-run university’s fire expert. He was prevented from entering the site.
Yet on the same day, the Daegu city government allowed a team from Japan’s National Research Institute of Fire and Disaster to investigate the subway site for three days.
Hong eventually “imported” supporting documents for his paper from the Japanese experts.
“It made no sense that local fire experts were denied access but foreign experts were allowed to investigate,” Hong says. “When an accident takes place, the government should promptly commission an investigative team to produce a report.”

Japan currently keeps a database of “failed information,” (http://shippai.jst.go.jp), a Web site of the Japan Science and Technology Agency, which organizes information on science and technology accidents and failures in terms of cause, action and results.
The database is telling evidence of the importance of “manuals,” to help avert similar accidents in the future.
Meanwhile, Kim’s family is slowly recovering from the trauma of losing Do-hyun.
Kim’s husband, who suffered from a breakdown, has slowly recovered. Tae-hyun, Do-hyun’s younger brother, now 13, underwent art therapy to deal with his grief and his parents’ anger. During the first few sessions with the therapist, he painted an entire canvas black. Now, his paintings include colors and he dreams of becoming a movie director.
In 2002, the couple had another son, Si-hyun.
But bitter memories remain. Kim has kept all her dead son’s clothes and she gets in touch every June with other families who lost children in the Sealand fire.
“We never learn from the past,” Kim says. “It breaks my heart to see that soldiers, one of whom was a father of a young baby, died needlessly in a helicopter crash.” The reference is to a military accident last month.
“Koreans have grown numb to accidents,” she says.