‘Kite Runner’ fails to get off ground

‘Kite Runner’ fails to get off ground 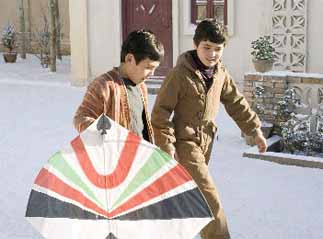 Hassan (Ahmad Khan Mahmidzada), left, and (Zekeria Ebrahimi) are two boys whose friendship is the nucleus of “The Kite Runner.” [MovieWeb]

My enjoyment of “The Kite Runner” was severely hampered by the fact that I couldn’t understand about 75 percent of the film.
I’d gone in knowing it was an American movie, produced by DreamWorks and directed by Marc Forster, with some foreign-language scenes. But unless English speakers can read and understand hangul fast enough to keep up with the subtitles, there is no way to get this dialogue.
That said, I was still able to grasp the simple storyline. Based on Khaled Hosseini’s best-selling novel by the same title, The Kite Runner is about a young Afghan-American man who must redeem himself for abandoning a childhood friend.
Amir (Khalid Abdalla), a writer by the time audiences first meet him, is the former character. As a child in Kabul, Amir (Zekeria Ebrahimi) is the best friend and kite-flying partner of his family servant’s son, Hassan (Ahmad Khan Mahmidzada).
Unfortunately, these roles are little more than caricatures. As the poor boy with a heart of gold (a tired cliche), Hassan is quick to defend Amir against neighborhood bullies. But Amir, who can cushion himself against the world’s ills with his father’s prosperity, fails to come through for Hassan when his friend truly needs him.
Cornered by bullies, Hassan is raped while a hidden Amir looks on. This scene ultimately leads to the one-sided undoing of their friendship, as Amir repeatedly betrays the steadfastly loyal Hassan.
While the rape scene is handled tastefully, it’s drawn much controversy in the U.S. The film’s distributor, Paramount Pictures, had to relocate the two child actors and their families to the United Arab Emirates for safety.
But sensation aside, the rape scene is the least of The Kite Runner’s flaws.
The film suffers by cramming too much into two hours. The real adventure in this film should be Amir’s heroic quest to rescue Hassan’s son from the Taliban. Instead, what should a treacherous trip to the hotbed of the Taliban turns into a slightly bruising weekend jaunt. From what I’ve heard of the book, Hosseini’s novel also falls short of tapping into the dramatic potential.
The Kite Runner also tries to shed light on Amir’s assimilation in the United States. After coming of age in Berkeley, California, the adult Amir is the quintessential Americanized Afghan, occasionally annoyed by his father’s Old World quirks yet bound by ties of heritage. But this film should either focus on the struggles of assimilation or the adventure of a rescue, not both. The result is an overstuffed, dragging narrative that fails both as a tearjerker and tension-filled trip. It’s like the poor man’s version of Jhumpa Lahiri’s “The Namesake,” only with Afghans instead of Indians.
I say skip The Kite Runner and get the book and DVD version of The Namesake.