No love for this Stone Age clunker

No love for this Stone Age clunker 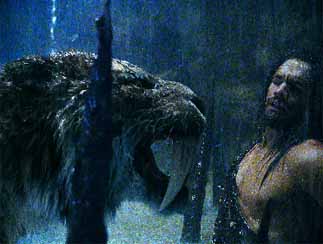 No matter how dire a movie, I never walk out. I have struggled through some stinkers in my time, but I will dig my fingers into the armrest and pray the finale will redeem the past two hours. But I admit only professional duty kept me seated through Roland Emmerich’s dismal “10,000 B.C.”
This is a trailer movie, edited specifically to contain the right formula to produce a 90-second promo. The highlights package you might have seen?last week at the theater or online is better than the full-length feature.
Emmerich and his co-writer Harald Kloser have hacked entire scenes and plotlines from recent epics ― you will see blatant parallels with “Gladiator” (2000), “Troy” (2004) and most obviously “Apocalypto” (2006) ― and stitched them into a disfigured beast.
The movie begins with the gravel-voiced narrator’s idiotic attempt at deep thought: “Only time can teach us what is truth and what is legend.” Eh?
I won’t bother recounting the story because it is just too silly. All I can say is we embark on a bizarre odyssey involving wooly mammoths, killer emus, lots of spears, family honor, primitive religious conflict and a love story so cretinous that only mind-altering drugs could induce cinemagoers into calling this entertainment.
Desperate screenwriters often make up for terrible dialogue by throwing in a bunch of contrasting locations. This movie is no different. The narrative whisks the dreadlocked hero D’Leh ― so cool you half expect him to slip into a Stone Age Starbucks and check his Facebook account ― from glacial mountains to a bamboo forest to what looked like the Kalahari Desert in less time it takes to say “The Flintstones.”
Ray Harryhausen’s 1966 fantasy “One Million Years B.C.” was far superior. At least that had Raquel Welch bouncing around in a loincloth.