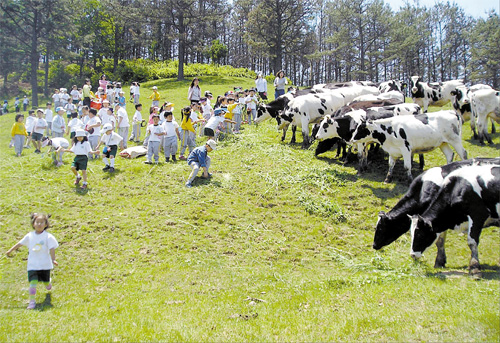 Imsil doesn’t look like cheese country. There are no pastoral farmlands or cobalt-blue lakes surrounded by Alpine mountains that you associate with European cheese making.
But this North Jeolla rural county produces a cheese that has tickled the taste buds of dairy lovers around Korea and is attracting up to 3,000 visitors a month.
That means farmers in Imsil must be the big cheese.
In fact, half the population of Imsil, located 27 kilometers (16.78 miles) west of Jeonju, plus 400 or so dairy cows, are involved in the local business.
Early one morning last week I took a bus from Seoul to North Jeolla and made my way to Imsil’s main town, which is aptly named the Cheese Village. 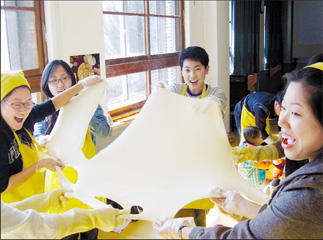 The entrance is across Palgak Pavilion, about a 15-minute walk from the bus station. A large zelkova tree grows here, which was the town’s namesake before it switched its name to Imsil Cheese Village.
A sign at the gate to the village reads: “Cheese Gate.”
I stopped a passing farmer and asked him about the gate. “We were going to put up a sculpture here of Didier t’Serstevens, the Belgian priest,” the farmer said. “But since he is still alive, the village head decided to build the gate first.
The priest is known by his Korean name, Chi Chong-hwan. He came to Korea in 1959 empowered with a strong desire to help victims of the Korean War.
One of his projects was to help boost Korea’s agricultural output. When he saw the fertile grassland, goats and Lake Okjeong near the village he realized he had excellent surroundings to pursue one of his hobbies: making cheese.
In fact, Father Chi, who is now 76, is thought to have been the first person to bring cheese to Korea, and thanks to Chi the cheeseman the village and the surrounding areas have been benefiting.
I had enrolled in a cheese-making program called Imsil Cheese Cook, which is run in Okjeong-ri, a 25-minute taxi ride from the Cheese Gate.
I was interested in this course because it teaches the basics of how to make homemade rice pizza. Being a pizza lover, this is a dish I really wanted to learn how to prepare.
Pastor Park Jae-hyun, an acquaintance of Chi, founded the program in 2005. His plan was to promote local agricultural goods as well as domestic cheese.
The classes take place at a closed-down school beside Lake Okjeong. It’s a stunning setting. Though the school has been shut for more than 6 years, it looks in good condition. Pastor Park has organized the renovations and turned the place into a comfortable environment for running his program. 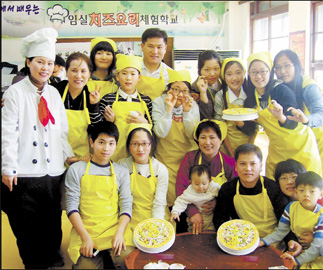 When I arrived, course participants were already hard at work preparing mozzarella for the pizza. They were set up in the school’s old classrooms, waiting for the milk to solidify, the first stage in the process of making cheese.
They had already added the lactic acid, bacteria and rennet, enzymes that help the digestion process, all of which are part of the process.
Kim Ki-ok, the instructor, said it takes around 30 minutes for the milk to set. While we waited, Kim talked about the history of the village.
She said that since the late 1960s Father Chi has helped create a great deal of work for farmers in the small villages dotted around the Jeolla countryside.
Koo Man-sung, 63, a farmer taking part in the class, talked about the first time he tasted cheese. It was in 1966 when the Belgian pastor offered him some Camembert.
“It smelled and tasted awful,” Koo said with a frown. “It must be like when Westerners taste doenjang [soybean paste] or gochujang [hot pepper paste] for the first time.”
Koo told Father Chi that Koreans would never take to the taste, and he urged him to find a substitute. Cheddar was suggested, which Koo then tasted, declaring it a better bet than soft French cheese.
By this time, the milk that we were preparing had gone lumpy. This was a good sign, and it looked like soft bean curd.

It takes more than 20 hours for the cheese lumps to harden, so Kim distributed mozzarella for us to cut into squares. When we added hot water, the cheese became highly elastic. You could stretch it two meters.
But my favorite part of the course was making the pizza. Imsil Cheese Cook is the only program that offers this course. The other two cheese-making programs ― Soopgol Appenzella in Deokcheon-ri and Cheese Village in Geumseong-ri ― teach you how to make a cheese pork cutlet dish.
Kim said Pastor Park introduced the pizza-making session to distinguish the program from the other two.
I had never made a pizza before, and I never imagined it would be so simple.
All we did was chop up some vegetables, such as onions, tomatoes and green peppers. We then made dough out of rice flour. Kim said rice flour made the pizza crust chewier than if you use wheat.
We put sweet potato around the crust and as a topping we sprinkled fresh mozzarella that participants had made earlier. It tasted very different from the pizzas you eat in restaurants ― definitely more natural. But, to be honest, I didn’t think it was as tasty. I guess my taste buds have been too corrupted by the extra salt and preservatives that you find in pre-packaged pizza.
Later, we took a stroll around the school, which is in effect a kind of dairy farm.
Behind the school two calves were mooing. Koo said we couldn’t milk the cows because the calves would get upset. Apparently, baby cows don’t like other people touching their mothers. Only the farmers had that privilege.
Lake Okjeong sits in front of the school, a site you cannot miss when you visit Imsil. It is strikingly beautiful, especially when an early morning mist rises from the water, I was told. It’s reputed to be one of Korea’s most popular driving spots. Cars motor around the lake, which is a shame because walking here is much more relaxing and less polluting.
Even so, Kim recommended a drive from Unam Bridge or Guksa Peak, about 30 minutes from the school. 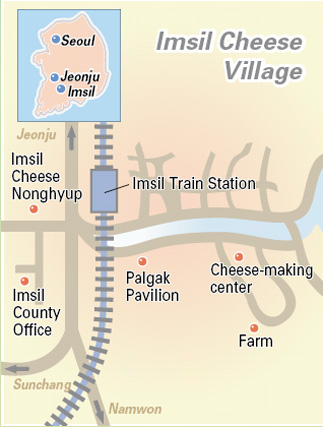 On my way back to Imsil Bus Station, I stopped by the head office and factory of Imsil Cheese Nonghyup, which is run by a group of 250 dairy association members.
The 41-year-old factory here is the first and only cheese factory in Korea.
“We have been working to develop a cheese that satisfies Koreans,” said Hwang Sung-shin, a member. She said French and Swiss cheeses taste too strong.
They have produced ginseng-, kimchi- and onion-flavored cheeses.
But these cheeses are an acquired taste. When I tried kimchi cheese I realized how much I missed the original flavor of cheddar and other varieties.
To be honest, I prefer the deep-flavored cheeses you can purchase at imported goods stores in Seoul.
Still, having the opportunity to make your own food is a lot of fun, and now I know how to make pizza. And I know never to milk a cow when her babies are watching.

Transportation:
The fastest way to get to Imsil County in North Jeolla is to take a bus from Nambu Bus Terminal (Nambu Bus Terminal Station, line No. 3, exit 5). A one-way ticket for the four-hour bus ride costs 12,000 won ($12.36). You can walk to Imsil Cheese Village from the station.
You can also visit Imsil by train. Take the Yeosu Line that heads to Imsil Train Station. But you need to transfer to a bus from the station to get to the village.

Restaurants:
For a quick lunch, stop by Sungshimhoegwan, a restaurant located near Gangjin-myeon, Imsil, across from the Gangjin Terminal. The restaurant specializes in black snail soup (6,000 won). Black snails are caught from Seomjin River. For more information, call (063) 643-1328.
You can also try fresh salmon trout (25,000 won) at Gangchon, a seafood restaurant located near Unam Bridge. A bowl of hot-pepper fish stew (35,000 won) is another favorite. For more information, call (063) 222-6322.