Spring is in the air.
You can smell the sweet fragrance of flowers and feel the sun streaming into the room. And at this time of the year, the Yangjae Flower Market Center in Seocho District, southern Seoul, is bright and breezy with visitors, especially at shops that sell flowering plants.
Both sides of the two-meter-wide alley are packed with about 120 flower shops.
The Yangjae Flower Market Center is Korea’s biggest flower market in terms of trade scale.

It is run by the Korea Agro-Fisheries Trade Corporation.
Flowers shipped from the floricultural farmlands to the joint market auction exceeded 73.4 billion won ($75 million) last year.
The busiest season falls between February and May. Forty-seven percent of the year’s flower consumption is sold during this period.
Since the flower market also deals in wholesale-retail, the flower prices are cheaper than elsewhere.
But flower prices differ from shop to shop and that’s why the flowers don’t have price tags.
The zone ― an area of 11,963 square meters ― was created as a greenhouse, which allows more spring sunshine to pass through the clear roof.
The stores’ floor is covered with familiar-to-the-eye flowers like roses and violets, as well as yellow, orange and pink cyclamens.
“Fancy, pretty flowers have no scent,” said Shim Mi-sook, the owner of Mirae Botanical Garden.
“On the other hand, flowers with rich fragrance are often infested with aphides,” she added.
Shim has been selling flowers at the market since 1991, when the Yangjae Flower Market Center was first established. She met her husband, who also sold flowers, and they married in 1987.
Over the years, Shim has learned a thing or two about flowers.
“Flowers too have a temperament,” Shim said.
She explained that a begonia likes the sun and though kalanchoes are not exposed to sunlight, the flower widely blossoms. A rose delights in mild, damp climates and wind, so the flower should be exposed to a breeze.

The red cyclamen and white begonia charm visitors at Yangjae Flower Market in southern Seoul. The hanging plants are string-of-pearls. By Byun Sun-goo

Flowerpots on sale at Shim’s shop range from 3,000 won to 6,000 won. With 15,000 won, you can decorate an entire living room, inner room and children’s room with three or four pots.
“For a child’s room, a small flower with many petals like the kalanchoe will do,” Shim said. She recommended that for a grandparent’s room, shiny begonias or cyclamens would fit best. For a newlywed couple’s room, red roses match well.
Though the sweet fragrance of flowers can cast a magical spell on the heart, Shim is worried that there are fewer flowers sold than before, perhaps due to a slowdown in the overall Korean economy.
“One of three customers is a window shopper,” Shim said. She is hoping that the end of winter and the refreshing spring season will mark an upturn in business.
In fact, a majority of the Yangjae Market visitors are on a flower outing. Rather than buy a bouquet of flowers, they promenade around the market to please the eye and the heart.
Besides the zone that sells potted flowers, there is another area that sells floral garlands, such as a flower baskets for gifts. Another section sells flowers for floral arrangements.
The first two zones open early in the morning and close around 8 p.m. But shops that sell natural flowers open at 1 a.m. All flowers in this zone are sold out by around 3 in the afternoon. 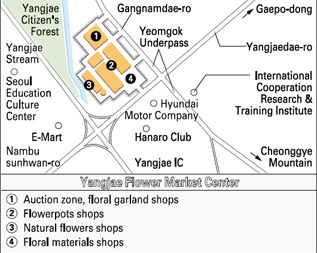 At the market’s auction block, you can see flowers on public sale. Flowers mostly used for arrangements, like chrysanthemums, carnations and roses, are auctioned in the early morning. Flowered plants like orchids and poinsettias are auctioned at 8 a.m. every day.
To visit the Yangjae Flower Market, (02) 579-8100, first go to Yangjae Station, line No. 3, exit 7. Transfer to a bus bound for Seongnam and Gwacheon. Parking is available for 1,000 won an hour.


Other flower markets in Seoul
Gangnam Flower Market
Many flower shops do business near the Express Bus Terminal in Banpo-dong, southern Seoul. On the third floor of the terminal, there are about 340 flower shops that cover the 3,000-pyong floor.
Around 40 percent of the flowers are sold to flower traders from Seoul and the rest are sold to traders from Gangneung, Daejeon, Daegu and Gwangju. Five percent are public consumers.
Natural flower shops are open at 1 a.m. for 12 hours and artificial flower shops are open from 1 a.m. to 5 p.m. The market is closed Sundays. (02) 535-2218.

Namdaemun Flower Market
The Namdaemun Flower Market in central Seoul is one of Korea’s oldest of its kind. Located on the third floor of the Daedo Arcade at the center of Namdaemun Market, flower shops have done business there since the 1960s.
The market isn’t as large or fancy as the Yangjae or Gangnam markets, but the traditional atmosphere will charm customers who stroll along the arcade.
The market is open from 3 a.m. to 3 p.m. There’s no parking available and it’s closed Sundays.