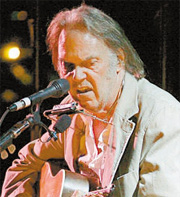 Neil Young will be in Seoul in May. [JoongAng Ilbo]

Woodstock, the legendary music festival from 1968, will be revived in Korea with a participant from the original event, Neil Young.
Young is known as the godfather of grunge and was inducted into the Rock and Roll Hall of Fame in 1995.
The concert in Seoul, titled “Flower Power Peace Festival,” is May 4 and 5 at Jamsil Olympic Stadium.
Woodstock was the biggest musical event that came to represent 1960s counterculture and the “hippie” era.
In the turbulent 1960s in the United States, hippies and students protested the Vietnam War while empowerment movements for blacks and women grew. The decade also saw the murders of John and Robert Kennedy and Martin Luther King Jr..
The festival’s spirit of peace will be nurtured at the upcoming show in Seoul, which is aimed at promoting peace on the divided Korean Peninsula, the last divided nation in the world.
“Flower Power Peace Festival means more than just another rock concert,” said Han Sang-ryong, chairman of the culture committee at Gangwon Television Broadcasting, sponsor of the festival in Korea. “The event is meaningful as Korea marks 55 years after the [Korean War] truce was signed. It also marks 60 years since South Korea was founded.”
The festival in Seoul will open in front of the DMZ, will move to Jamsil.
It brings together singers from the 1960s and 1970s, including Rod Stewart, a Hall of Famer in 1994, Don McLean, Judy Collins, Janis Ian and Melanie Safka-Schekeryk.
Also on stage will be Linda Ronstadt, the Alan Parsons Project, Janis Ian, the Brothers Four, Donovan and Crystal Gayle.
The organizer said Elton John is another possible participant.
This is the first visit to Korea for all participants except for Safka-Schekeryk, who came up with the idea for a Woodstock-type festival in Korea after visiting the DMZ in 2006.


Tickets for the Flower Power Peace Festival will go on sale March 17 at Ticketlink (www.ticketlink.com) and Interpark (www.interpark.com).