The quiet city park where independence was declared

The quiet city park where independence was declared 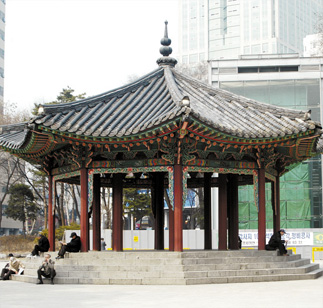 Palgakjeong Pavilion in Tapgol Park marks the spot where Korea’s Declaration of Independence was read out by a student on March 1, 1919.

A feeling of idle tranquility blankets Tapgol Park. The atmosphere contrasts with the busy crowds bustling about on the streets outside its walls.
Men of all ages occupy the wide open space. They flip through newspapers and bask in the warmth of spring. They make small talk or just sit quietly, surrounded by monuments erected to commemorate the March 1 Movement.
Tapgol Park, located near Insa-dong in central Seoul, was built in 1897. It was Korea’s first modern public park.
But the park has a much larger historical significance: The March 1 Movement of 1919 ignited here during the Japanese occupation. An octagonal pavilion, Palgakjeong, marks the exact spot where Korea’s Declaration of Independence was read out for the first time.
At the time, United States President Woodrow Wilson had indirectly inspired Korea’s push for independence. In January 1919, Wilson made a landmark speech at the Paris Peace Conference, outlining the basis for ending the First World War. His “Fourteen Points” called for self-determination and the forming a league of nations to sustain peace.
A few days ago, I stopped and chatted with two men strolling in the park. They had been looking at some of the wall monuments.
“Almost nobody here seems to think about the March 1 Movement or the park’s contribution to our independence,” said one of the two men, both of whom are in their early 70s. “It happened too long ago.”
Another passerby, though, remembers the actual event. Jung Tae-young, who is over 90, is a frequent visitor here.
“I was only 5 on March 1, 1919,” said Jung. “Back then there weren’t any buildings around the park and not much in the park, either. But that day the entire park was jam-packed. I was too young to know what was going on, but I remember everyone was shouting for independence.”
The demonstration broke up when gunshots rang out. “People scattered in every direction, scared out of their wits. I ran as fast as I could. It was total chaos,” says Jung, who travels to the park from Suwon, Gyeonggi every day.
“I may have been too young to fully understand what was going on, but I can tell you this: The people who visit the park today have little respect for the sacrifices our ancestors made for independence. They are not doing justice to the place,” he says.
On that fateful March day, 33 Korean nationalists ― including the leader Sohn Byung-hee, the historian Choe Nam-seon and the Buddhist monk Han Yong-un ― published Korea’s Declaration of Independence and signed it at a nearby restaurant called Taehwagwan.

The original plan was to read out the declaration in the park on March 3, but that day was the funeral of King Gojeong, and March 2 was a Sunday.
The 33 signatories were also aware of the growing numbers of people gathering in Seoul for the royal funeral. They feared the situation could turn violent, so they choose the nearby restaurant as a more discreet meeting place.
After they signed the declaration at the Taehwagwan, they shouted “Daehan dongnip mansei! (Long live independent Korea!)” and sent a copy of the declaration to the Japanese governor general. They then called the Japanese police to explain their actions and were promptly arrested.
At 2 p.m. that afternoon, the crowd waited for the 33 nationalists to show up. They didn’t, but a student named Jung Jae-yong did. From the Palgakjeong Pavilion in the center of the park, he read out the declaration to the listening masses.
In response, the crowds shouted “Long live independent Korea!” and marched out of the park waving national flags.
In all, some historians estimate that 450,000 protesters participated in the rally that day. The Japanese authorities used force to break up the demonstration, but news spread all over the country, even to Jeju Island.
Over the next three months, an estimaed 2 million people joined 1,500 demonstrations nationwide.
But the Japanese killed 7,000 Koreans in their attempts to break up the independence movement, according to official Japanese government figures at the time.
“Tapgol was the perfect place geographically to hold a massive demonstration,” says Kim Yong-dal, a senior researcher at the Institute of Korean Independence Movement Studies.
“The park is situated in the center of the Seoul and it was where many Seoul residents and students could easily gather,” he says.
“The YMCA which the students who participated in the March 1 movement was just a few steps away from the park, as well as the Jeongdong church and the headquarters of Cheondogyo, which were religious groups that led the movement,” Kim says.
The researcher said the royal funeral added popularity to the movement among the people. King Gojeong’s death symbolized the nation’s grief over losing its sovereignty.
Additionally there were rumors the Japanese had poisoned the Korean king in retaliation for trying to gather international support for Korea’s independence claims. 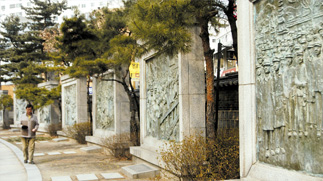 Monuments depicting the spread of the March 1 Movement through Korea in the months following the Declaration of Independence circle Tapgol Park. By Lee Ho-jeong

“Prior to the March 1 Movement, Korea’s fight for independence had not been well- organized,” said Kim. “Tapgol Park was where the movement became focused.”
Despite its historical heritage, the park is now just a regular urban recreation space. It is also known as Pagoda Park, because it houses a 10-tier pagoda, designated National Treasure No. 2 and protected by glass.
The pagoda is the only reminder of the Buddhist temple, Wongak, that stood here in the early part of the Joseon Dynasty (1392-1910). There’s also a poignant bas-relief here depicting the Declaration of Independence. 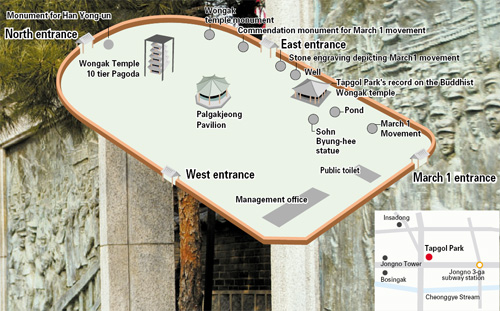