[Talk of the town]No call back for comic Noh

[Talk of the town]No call back for comic Noh 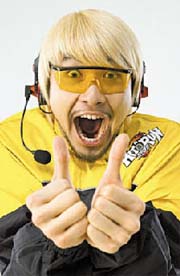 Entertainer Noh Hong-chul, 29, is known for his bravado. During a recent episode of MBC’s variety show, “Ultimate Challenge,” he proved his boldness by calling President Lee Myung-bak while on the air.
Other cast members of the show including Yu Jae-suk and Jeong Jun-ha were surprised.
“There are no political intentions, but I’m calling because he [President Lee] is one of my close friends,” Noh said.
Apparently not that close. President Lee didn’t answer Noh’s call.

Grace Lee’s next project: American zombies in Brussels
Korean-American filmmaker Grace Lee will be headed to Brussels next month.
The organizers of the 26th Brussels International Film Festival have invited Lee’s film “American Zombie” (2007) to be screened in Belgium. Korean film company iHQ funded American Zombie with 1 billion won ($1 million).
The film is about the lives of four zombies living in Los Angeles who search for tolerance as they discover their identities.
Lee is best known for her film “The Grace Lee Project” (2005), which depicts Asian-American stereotypes.
The BIFFF will run from March 27 to April 8. 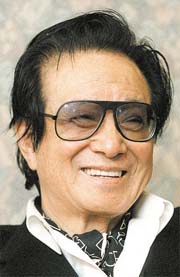 Italians spotlight movie director Shin
The works of the late director Shin Sang-ok (1926-2006), one of the pioneering directors in Korean film history, are getting international attention. The 2008 Udine Far East Film Festival, which opens April 18 in Italy, will present a retrospective of Shin’s works.
The festival will screen four of Shin’s works, including “The Flower in Hell” (1958), “It’s Not Her Sin” (1959) and “Sister’s Garden” (1959), the Pusan International Film Festival office reported.
Shin, who was abducted by North Korean agents in 1978, produced films including “My Mother and Her Guest” (1961) and “Evergreen” (1978).

Celebs head down the aisle as spring wedding season blossoms
Spring seems to be the season to tie the knot. Last Saturday, actor Song Il-gook, 37, married a lawyer, known only by her last name Jung, who is five years younger than Song. The traditional-style wedding was held at the Sheraton Grande Walkerhill Hotel in Gwangjang-dong with 1,500 guests.
Entertainer Kang Soo-jung also walked down the aisle that day. She wed a Harvard graduate known as Kim, a fund manager in Hong Kong.
By Lee Eun-joo