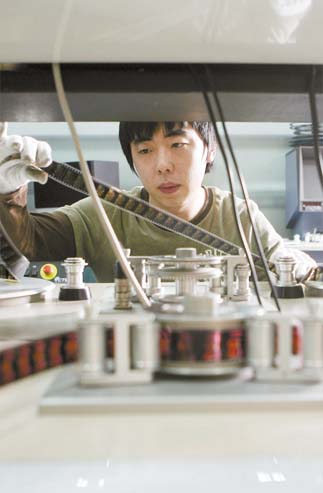 A film restoration expert examines a roll of film for damage at the offices of the Korean Film Archive in Sangam-dong, Seoul.

Even pros get nervous.
After 18 years in the industry, Kim Young-mi said restoring the movie “Cheongchuneui Sipjaro (Crossroad of Youth)” was one of the most exciting projects she had worked on, but also one that filled her with trepidation.
“I could hear my heart pounding when I got to work each day,” said Kim, 38, who works at the film conservation center in the Korean Film Archive. Her job is repairing damaged film, getting rid of scratches and markings.
“This was the first time I had ever worked on a film this important,” she said.
Crossroad of Youth is the oldest Korean film in existence, an honor that previously went to Yang Ju-nam’s 1936 film “Mimong (Illusion),” which was discovered in China in March 2006.
But Crossroad of Youth, a silent movie directed by Ahn Jong-hwa, was made two years earlier.
?“We didn’t know what the film was when we first looked at it,” said Jang Kwang-heon, who manages the conservation center and supervised the restoration project on the 70-minute silent movie.
According to Jang, the father of the film’s owner ran a movie theater called Dansungsa in central Seoul.
“Hee said his father salvaged everything he could from the cinema after the Korean War ended [in 1953], including a canister of the film Crossroad of Youth,” said Jang. “He also said his mother’s will instructed him to keep the film, which he did.”
Jang said the owner, who doesn’t want to be named, contacted the government in the 1960s and 1980s about the film. There was little interest back then, partly because the technology didn’t exist to examine or restore old and damaged film.
“So the movie just sat in this man’s house for years,” Jang said. The Korean Film Archive acquired the film last October after lengthy negotiations with the owner.
The restoration team believes part of the film is missing, perhaps 10 to 15 minutes’ worth, but the movie was in good condition, except for earlier scenes that were damaged.
“Some of the scenes had completely deteriorated,” Jang admitted.
Out of curiosity, the owner had opened the canister twice over the years. “I think it was that exposure that destroyed part of the film. We’re still very lucky to have the film in such good condition.”
What excited the conservation team the most was that the film appeared to be the original, not a copy.
“We could see that the film still needed to be edited,” Jang said. Some scenes were in sequence but the overall narrative was disjointed. As the team worked on the film, it also had to put scenes in order to make sense of the plot.
The film was restored by copying the original onto polyester film. This technique is different from the restoration of paintings, since restoration teams working on oil paintings, for instance, work on the original piece of art.
“At first we thought the film was “Eunhae Heureuneun Jeongryeol [Virtue Streaming in the Galaxy],” but we eventually could see that the plot and actors didn’t match up with official records,” said Jang.
Virtue Streaming was also directed by Ahn Jong-hwa, in 1935, but no copy has been found. Ahn made 12 films before his death in 1966.
The team also discovered that they had a nitrate film and a negative on their hands. “I was overjoyed,” Jang said.
No nitrate Korean films were thought to be in existence from that period, not to mention in negative form, Jang said. Movies were made using nitrate film in Korea from the 1950s in positive form. Before that, filmmakers used negative nitrate film. 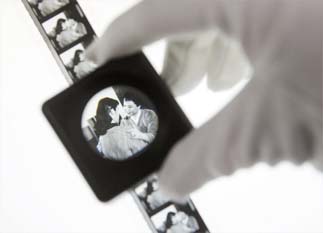 A scene from a black and white movie undergoing restoration work. By Jeong Chi-ho

Today, only two kinds of film are used: triacetate and polyester.
“Today more people use polyester because it is strong and durable,” said Jang. “But because of its strength, the film can actually damage filming equipment.”
Staff at the conservation center believe that the successful restoration of Crossroad of Youth is nothing less than a miracle. Nitrate film usually erodes after 50 years ― it is vulnerable to heat and nitrate film is highly flammable.
“It is a miracle that the original owner’s house didn’t burn down when you consider the summer heat. The film canister holding the movie could have exploded during hot weather,” he said. ?
The original nitrate film is now stored in a refrigerator at the Korean Film Archive at minus 0.6 degree Celsius and 62.3 percent humidity.
Humidity is a threat: It causes film to shrink, making it useless. Nitrate film is stored at subzero temperatures for protection.
“If the film shrinks more than 3 percent, it can’t be restored.” If the film shrinks too much, it cannot be fitted into a projector.
These factors contributed to making this restoration project incredibly challenging, which was compounded by the lack of adequate equipment.
The team only had access to technology that can only handle 1 percent shrinkage of the original film. The team had to send the materials to Japan, where more advanced equipment is available.
This decision, in turn, created a logistics nightmare. “The airline company refused to fly the film to Japan because it was too dangerous,” said Jang. The canister could explode if the temperature on the aircraft is not closely controlled. “It took us a month just to pack the film in a special container that the airlines would permit us to check onto the plane.”
According to film archive records, Crossroad of Youth was the 80th film to be made in Korea. The first is thought to be “Wolhaui Maengse (Wolha’s Vow),” which was made in 1923. 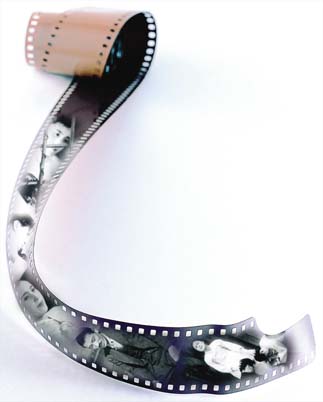 “This is a very significant outcome for the Korean Film Archive,” said Kim Jong-won, film critic and professor of film at Dongguk University.
“The Korean Film Archive has been trying very hard to find films made during the colonial period. The film also gives us insight into the quality and form of Korean films made in the last period of silent films in Korea.”
Korea’s first “talkie” was “Chunhyangjeon (Story of Chunhyang), shot in 1935.
Crossroad of Youth is a striking story set in the 1930s when Korea was still heavily influenced by Confucian teachings. The story revolves around young people moving from the countryside to find work in Seoul during the Japanese occupation. There is much heartache in the movie, such as when Yeong-ok follows her older brother, Yeong-bok, to Seoul where she is raped and ends up working at a shady cafe.
The movie shows women smoking and drinking in bars and men playing golf. There is even a scene where a woman converts to Christianity.
Min Byung-hyun, a public relations official at the Korea Film Archive, said they plan to screen the film May 9. “We want to recreate the way silent films were shown at the time with a voice actor and preshow performances,” said Min. “We don’t have the original script for the film, so we will come up with our own.”
Director Kim Tae-yong, who made “Gajokeui Tansaeng (Family Ties)” in 2006, will organize the public viewing. For more information, contact the Korean Film Archive at www.koreafilm.or.kr. Further details about the screening will be available next month.