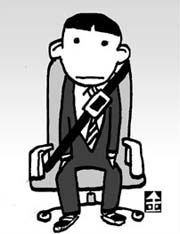 The Korean dictionary defines a “spoilsman” as one who makes every effort to gain a government post. However, when the “spoils system” becomes an administrative word, the meaning changes. It means the principle by which the ruling party and its leaders decide the appointment and dismissal of bureaucrats after winning an election. Appointment depends on loyalty to the ruling party. If the level of intimacy with the person appointing the bureaucrats is the foremost consideration, then we call it favoritism.
The spoils system blossomed in the United States. In 1829 in particular, the seventh U.S. president, Andrew Jackson, called it democracy in action and used the system as the basic principle of his appointments. It was an attempt by Jackson, the son of a Western settler, to give ordinary people access to federal government posts ― then monopolized by the Northeastern upper class. Nevertheless, Jackson only reshuffled 10 percent of government posts. Later, the system became more widespread, reaching its peak from 1845 to 1865. It is during that period that the term “spoils system” appeared, evolving from Senator William Marcy’s statement: “To the victor go the spoils.”
Former U.S. President Abraham Lincoln, who took office in 1861, exercised the spoils system the most. Of the government posts a president can appoint, he replaced 85 percent. He is considered the president who applied the spoils system most efficiently and commendably. He must have had a good eye for detecting unqualified people.
After having turned down one candidate, Lincoln apparently said to his assistant, “I don’t like his face.” When the assistant said, “But he can’t be responsible for his face,” Lincoln replied, “A man over 40 is responsible for his face.”
The spoils system developed as a means for a political leader to strengthen government leadership and consolidate homogeneity between the public sector and the people. Still, there is a great danger that incompetent people become bureaucrats and serve the special interests of the party instead of the general public. Today, no democratic country promotes the spoils system, but it has not been eradicated for these double-edged reasons.
The battle over the retirement of government officials who shared the ideology of the previous administration is a peculiar case. The problem is that spoilsmen of the previous government can’t be replaced with those of the new administration because of a law in force since last year that guarantees the posts until the end of their terms. It is too bad for the Grand National Party that it agreed to such legislation.