Scenic port is the ideal venue for classical concertos

Scenic port is the ideal venue for classical concertos 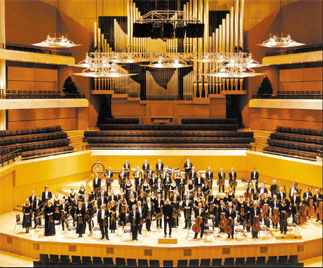 The BBC Philharmonic will open the festival on March 21.

“ Freiheit,” the German for freedom, is the theme of this year’s Tongyeong International Music Festival.
The theme is derived from Concerto No. 2, “Devotion to Freedom,” by the late Korean-German composer, Isang Yun (1917-1995).
The festival began in 1999 to honor Yun, who was born in Tongyeong, South Gyeongsang. In 2002, it shifted from a one-night concert to an annual festival program.
This year the curtain will go up at 7:30 p.m. tomorrow evening at the Tongyeong Arts Center. The BBC Philharmonic Orchestra led by Gianandrea Noseda will give the opening concert: Yun’s “Colloides Sonores” and Beethoven’s Symphony No. 7.
Grammy Award-winning violinist Hilary Hahn will play Sibelius’ Violin Concerto with the British orchestra. 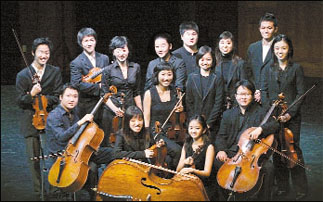 Korea National University of Arts’ String Ensemble will close the festival on March 26.

The Parker String Quartet, Isang Yun Ensemble and the classical jazz band Jacques Loussier Trio will perform on March 22.
Beyond Infinity Ensemble Seoul will perform classical pieces by Korean composers on March 23. The Hague Percussion Ensemble will perform on the same day.
On March 24, Ensemble TIMF, led by conductor Guillaume Bourgogne, will take center stage with P. A. Locatelli’s Concerto Grosso a Quattro No. 11, Op. 1 and Haydn’s Piano Concerto in D major.
The spring concerts finish on March 26 with a recital by 20-year old Armenian cellist Narek Hakhnazaryan, a winner of the 2006 Kyeongnam International Music Competition, plus a concert by the Korea National University of Arts’ String Ensemble later in the evening.
Premier musicians are not the only ones performing at the Tongyeong International Film Festival. A wide range of participants such as a cappella clubs, student bands, and a “popera” group will show off their musical talent in various indoor and outdoor venues in “fringe” performances. 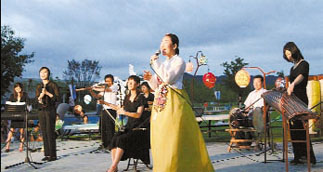 Fringe concerts are planned throughout the six-day festival. Provided by the organizer

The festival kicks off its six days of concerts on Friday, March 21. For those who would like to explore the port city and scenic coast while enjoying the music, the organizers offer a package program which includes concert tickets, transportation, lodgings and sightseeing. For more information, call (055) 645-2137 or visit www.timf.org.