You’ve got 24 hours to write the plot, Jack

You’ve got 24 hours to write the plot, Jack 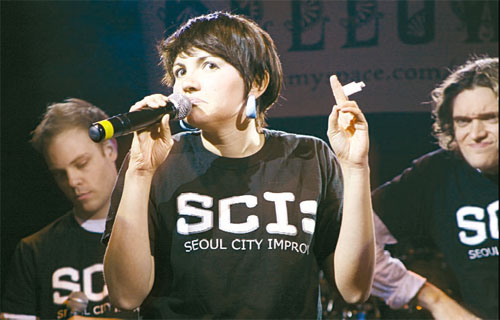 This weekend anyone can become a director, an actor or a writer. All you need to spare is 24 hours and bucket-loads of creativity.
Seoul Players, a group of English-speaking thespians residing in Korea, invites you to its “24-hour Theatre,” scheduled for tomorrow at 9 p.m. at The Orange Tree in Haebangchon, Yongsan District.
The group, founded in 2001, stages two plays each year. They have previously performed “Hitchcock Blonde” by British playwright Terry Johnson and “Dinner on the 14th Floor” by Canadian playwright Evan Placey.
After jotting down your name as you enter the venue, you’ll be randomly assigned to a team. Each team has one writer, two to four actors and a director.
You get to choose which role you play, though the number of parts depends on how many people show up on the night.
The teams spend some time getting to know each other while the writers conjure up the basic composition of the play.
They decide on the opening line, setting, props and genre ― comedy, romance or tragedy, for instance.
All the ideas are dropped into an “inspiration bucket” and then the writers stay up half the night writing. A final version of the story must reach the organizers of the event by 8 a.m. the next day.
The directors spend the next day rehearsing with the actors at a location of their choosing.
At 9 p.m. Saturday, it’s showtime at The Orange Tree.
“We [Seoul Players] invite you to explore different things,” said Pamela Munoz, one of the organizers.
“We are expecting basically anyone who is interested in theater. It doesn’t matter whether you’re a novice or a veteran.”