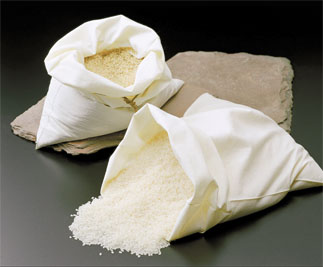 Farmers around Korea are sniffing the breeze and anticipating the advent of the rice-planting season. The average daytime temperature reaches 15 degrees Celsius in May, prompting farmers to pull on their knee-high rubber boots and start planting rice.
But for most rice farmers like Kim Chang-sun, the approaching season doesn’t look promising.
Kim, 72, says rice farming is a laborious task, especially when he hardly makes any cash these days.
“Ever since Western dining culture started to affect the eating preferences of Korean families, rice has been neglected,” said Kim, who owns a rice farm in Youngjong, Incheon.
Kim isn’t alone in feeling this way.
Jeon Gwang-ok, a 70-year-old farmer from Siheung, Gyeonggi, is also having difficulty earning a living from growing rice. 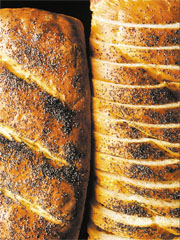 A selection of breads

The situation is even worse for Jeon, especially when the future of his 72-acre plantation, which he has owned for more than 30 years, is at stake.
“The area was once part of a greenbelt, a zone that limits industrial development, but in 2006 the Siheung city government began developing the area,” Jeon said with a sigh.
Since then, industrial companies have been trying to buy the land to build houses and factories on it.
When Jeon heard that fewer Koreans are consuming rice, according to the National Statistical Office, he began to frown.
According to the data, 87 kilograms of rice were consumed per person in 2002, but the amount decreased to 76.9 kilograms per person last year.
“With more working husbands and wives, families look for simple meals like bread, instant noodles or cereal,” said Ryu Bo-seon, an administrative official from the office.
Kim, the farmer, agrees.
“With the changing eating habits, it’s hard for farmers like us to live just by planting rice,” he said.
The total income from 1,000 square meters of rice paddy was 854,241 won ($833.73) last year, which marked a 4.2 percent decrease from 2006.
The production costs per 1,000 square meters, on the other hand, increased 1.2 percent from 600,121 won in 2006 to 607,354 won last year, in large part because the cost of fertilizer and agrichemicals rose.
Meanwhile, the price of wheat is now close to the cost of imported rice, which naturally raised the price of bread, cookies and noodles.
President Lee Myung-bak and his cabinet ministers have suggested that farmers produce more rice products as an alternative to wheat.
In January a group of farmers and fishermen appealed to the government for more help and plans to protect agriculture. 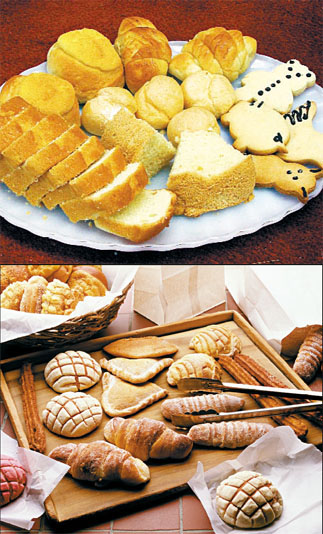 A selection of breads, cakes and cookies made from 100 percent rice grown in Korea. Provided by Rice Zone

Lee replied that relying on rice farming to make a living was no longer enough and that production of rice-based goods should increase. He said a radical rethink of agricultural and eating habits was required.
“Since we [Koreans] eat a lot of noodles, they [noodles] should not only be made of wheat but also out of rice. This will increase the rice consumption rate,” Lee said, adding that thorough research is needed on how to deal with the rising cost of wheat.
Lee also suggested that noodles served in seolleongtang, a kind of beef soup, should be made with rice instead of wheat.
“The price of wheat has risen suddenly and there is a rice surplus,” Lee said. “Why can’t we serve rice noodles in beef soup?”
But the problem is that rice costs three or four times more than wheat. One kilogram of wheat costs 620 won whereas a kilogram of local rice costs 2,300 won. Imported rice costs 650 won a kilogram.
“Farmers have been using rice to make different food products ever since Korea started to import rice in 2002. Imported rice is cheaper and is competitive with the cost of wheat,” Jeon said. “President Lee’s suggestion to make more rice-based products will promote the consumption of more imported rice from America or China.”
In fact, there have been some successful cases of rice products in the market.
Rice Zone, for example, a bakery that uses domestic rice instead of wheat, has been making a 35 to 40 percent profit since it opened its first branch in Bangbae-dong, southern Seoul in 2003.
According to Lee Jong-myung, Rice Zone’s executive director, 35 percent of the Korean population cannot eat wheat bread because it is too heavy on the stomach and causes indigestion.
“But rice bread is different,” Lee said. “Gluten, a type of protein found in wheat, makes it easier to knead the flour but it can cause indigestion. But rice doesn’t contain gluten, so it is easier to digest and contains more nutrients.”
He said people who are allergic to wheat are safe eating bread made from rice.
The Industrial Property Office licensed Rice Zone’s products in 2002, and the company has been producing premixes for rice baked products, including cake, cookies and baguettes. 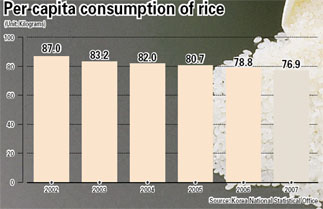 Kim said he believes more people are learning how nutritious rice is compared to wheat and instant foods, based on the fact that GS Retail, a retailing unit of GS Group, announced last Wednesday that it sold 21.3 percent more rice in its GS Supermarkets and GS25 marts between the end of February and early March.
And high prices are making more people eat at home.
“Noodles, jajangmyeon [noodles in stir-fried bean paste] and bread have become more costly because of the rising cost of wheat,” said Kim Sun-jong, a merchandiser at GS Retail.
Another plus in rice’s favor is that rice has a longer shelf life than other foods and is affordable when there is inflation, Kim said.
Kim the farmer said he is relieved to hear that families are turning back to rice.
“Despite the influx of Western fast and instant food, Koreans will go back to rice because it has been the nation’s major crop for more than 2,000 years,” he said.
In any case, the seasoned farmer said, Korea’s land is suited to rice cultivation and rice farming.
“What will be the use of land if there are no farmers to plant and harvest the crops? What will happen to Korea’s future agriculture?”