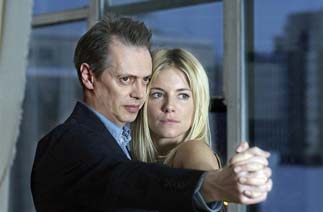 Steve Buscemi, left, and Sienna Miller dance at her loft in “Interview.” Provided by Sony Pictures

I have always enjoyed good dialogue movies, especially Woody Allen’s “Hannah and Her Sisters” and “Husbands and Wives.”
Dianne Wiest and Judy Davis brought priceless edge and energy to the screen in those films.
Well, “Interview” doesn’t quite approach the scope and intensity level of those movies, but it’s nevertheless appealing in its own way.
Perhaps I was in the mood for some gut-level, honest conversation, alcohol-fueled or not. Well, maybe not always honest, but certainly interesting.
And maybe lately I’ve seen too many special effects and computer-graphic monsters. I was ready for some one-on-one connection ― just one person talking to another. In Interview, it’s a journalist (Steve Buscemi) and a young, lovely blonde actress (Sienna Miller) who is much shrewder than the journalist thinks.
Buscemi plays Pierre Peders, a political print journalist demoted to writing fluff profiles for playing fast and loose with his sources. Miller is Katya, an actress seemingly content with B-movie roles that entertain the masses.
During the interview, the characters flirt, duel, dance, insult each other and play nasty head games.
There are some funny lines in the film and I laughed out loud a couple times. The Koreans in the theater also laughed, especially when Buscemi cracks, “Watch out Meryl Streep.”
Pierre and Katya gradually reveal their own scars and demons through excellent character development. The film gives both actors plenty of opportunity to demonstrate their skills, and at 84 minutes, the running time is just right. Even so, by the end, I could have sat in on this conversation a little while longer.