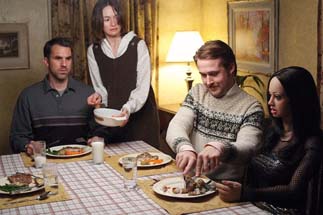 Brother Gus (Paul Schneider) and sister-in-law Karin (Emily Mortimer) get a shock from Lars (Ryan Gosling) and his dinner “date” Bianca in “Lars and the Real Girl.” Provided by MovieWeb.com

“Lars and the Real Girl” is a weird, somewhat predictable movie.
It’s also quietly touching, sweet, well scripted and artfully acted.
Ryan Gosling, as the titular character, earns his much-deserved top billing in this film.
Although this isn’t a “serious” movie, Gosling as Lars takes a step further in proving his bona fide talent. As a former teen idol more accustomed to showing off his good looks in such showbiz detritus as the TV series “Young Hercules” and the melodramatic romance “The Notebook,” Gosling, as of late, has taken on more challenging roles.
As Lars, he claws his way out of his pretty-boy pigeonhole, growing a walrus moustache and donning an unflattering Midwestern wardrobe and hairstyle. Juxtaposed photos of Gosling in all his handsome, real-life glory with stills from Lars and the Real Girl may even be enough to momentarily silence the usual droves of screaming women.
Lars’ character is also a polar opposite of Gosling’s last role, slick, hotshot lawyer Willy Beachum in “Fracture.” He’s literally painfully introverted ― he compares skin-to-skin contact with the feeling of “when you go outside and your feet freeze and you come back in and then they thaw out.”
Lars trips, staggers and falls through his awkward social interactions. His concerned sister-in-law, Karin (Emily Mortimer), has to tackle him to force him to accept a dinner invitation, and he largely remains disengaged from his co-workers.
All this changes when Bianca enters his life. He voluntarily visits his brother Gus (Paul Schneider) and Karin, learns to love, gets therapy to overcome his crippling social anxiety and opens up to his colleagues. But here’s the catch: Bianca is a life-size sex doll, and Lars is deluded enough to pretend she’s real.
Thankfully, screenwriter Nancy Oliver, of “Six Feet Under” fame, steers far away from pegging Lars a sexual deviant. He’s not perverted; he’s puerile. With his child-like innocence, Lars honestly believes Bianca is real. Heeding the advice of Lars’ ever-wise family doctor, who also happens to be a shrink (the still-gorgeous Patricia Clarkson), Gus, Karin and the rest of their rural American town decide to humor him.
Oliver and director Craig Gillepsie manage to cleverly share a wink with the audience over their main character’s foible through various allusions. During a party scene with co-workers, Tom Tom Club’s “Genius of Love” blasts its lyrics on deep love over the stereo. Viewers who are fans of more contemporary tunes may also remember how Mariah Carey sampled the 1980s song for her 1995 hit “Fantasy” ― also apt in Lars’ situation.
Then there’s “Dancing for No One” by Hello Stranger, which plays as Lars, at the same party, slow dances solo, arms hugging air while the plastic Bianca remains relegated to her wheelchair. Later, Lars reads aloud to Bianca a passage of “Don Quixote” that describes Cervantes’ similarly vexed Spanish hero: “But what distressed him greatly was not having another hermit there to confess him and receive consolation from.”
Somehow, this silly film about a sex doll endears itself to viewers. Gosling’s co-stars, Clarkson, Schneider and especially Mortimer volley their lines with his character with such skill, viewers may forget the absurd premise of an otherwise realist film.
Kelli Garner as Lars’ officemate Margo is also great with her vulnerable, Toni Collette-esque charm. Anyone who’s seen the Lars and the Real Girl trailer will know Margo’s fate at the end of this film, but that doesn’t cheapen any bit of Garner’s performance.
While the “real girl” of this movie’s title may be anything but, the tenderness this plastic doll manages to evoke definitely is.